We scheduled some work at MSRV Solutions and were there Monday and part of Tuesday morning.  We could not be more pleased with Daniel and Carl's work. 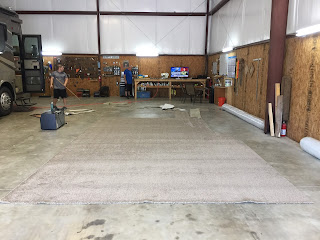 When we arrived just before 7 AM, the first thing I noticed was our new carpet laid out on their clean floor.  In fact the whole grounds, building and work area was well maintained, cleaned up, and well organized.  Impressive.  "You only get one chance to make a first impression" as the saying goes.  It was true here.

I had talked with Daniel a number of times and we made sure we ordered the correct thickness of carpet.  If it is too heavy, the slides won't slide in and out correctly.  Initially, we contacted Daniel for an appointment and had to reschedule.  Then as our appointment got closer, we ordered the carpeting from the Lowe's in Tupelo.  Carl picked it up and it was ready to go on Monday morning.

We went over the list of repairs that we wanted to get done. We had talked on the phone previously but the list grew longer as we got closer to Red Bay.  About 10 days before we arrived, out DS slide out would not go all the way out.  It was not the shear bolt that we had replaced a couple of times over the years so we didn't know cause of the problem.

Also we needed new arms for the main "patio" awning.  One arm was not working properly and would not retract.

Another big item for us was a leaking hydraulic cylinder for a rear slideout.  It was a slow leak but something we wanted to get fixed.

Repairs were also needed on the rubber gaskets around the DS slideouts.  We had rope lights installed near the ceiling in the front slide out interior area of the coach and one was not working.


Fixes:
Carpeting. We removed all the items we had stored under the bed.  The bed frame was dismantled and put temporarily in the front of the coach.  The old pieces of carpeting we removed and used as patterns for the new carpet. 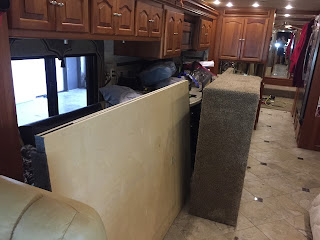 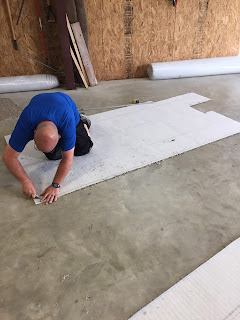 In no time the new carpet went down.  It was immediately a major improvement. 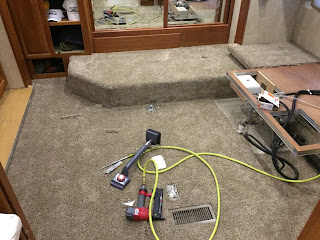 When the bedroom bed and frame were put back together, we moved the items back where they were originally. 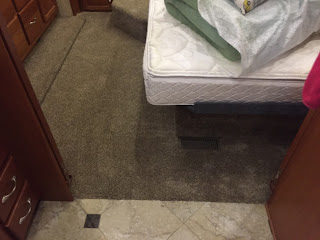 Daniel removed the couch and only the heater hoses and seat belts remaining.  One they were removed, the grungy carpet was carefully removed. 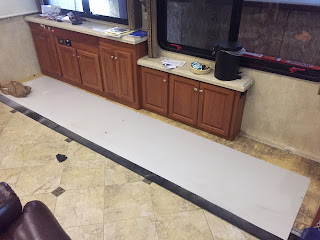 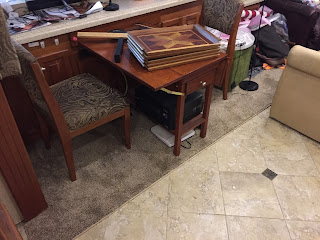 Once the DS was done, Daniel worked on the PS. 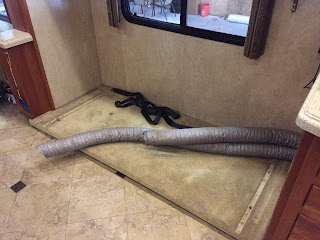 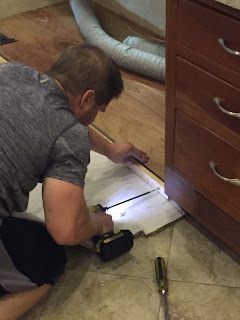 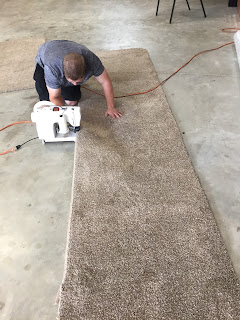 While he was doing that Carl replaced the carpet up front in the stairwell and under the brake pedal. 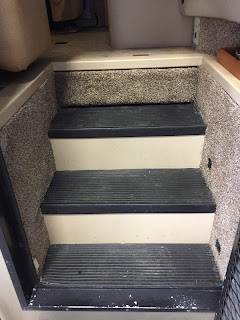 Another big job was replacing the two awning arms.  One had worn out and the awning would not extend. 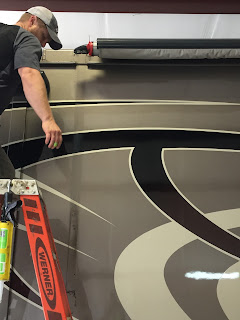 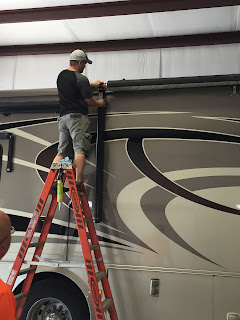 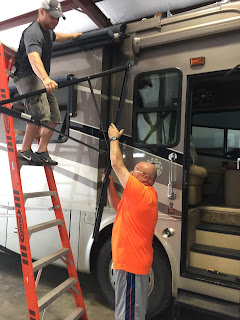 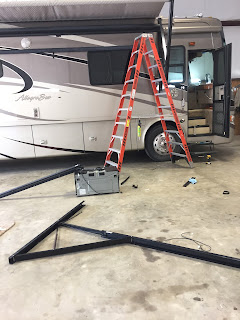 Inside, rope lights under the ceiling trim on the DS were not working.  Daniel found the problem, made a better connection and secured it. 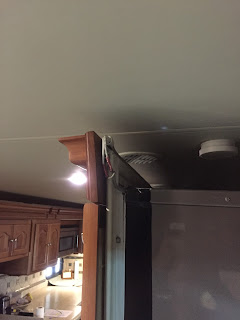 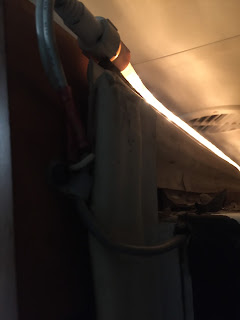 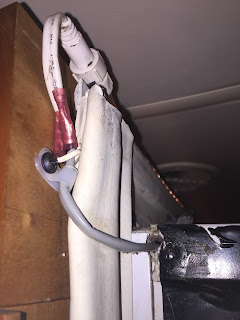 Next, they worked on getting the DS slide to retract and go out.  After a lot of looking things over, Carl found a roll pin that was broken.  Instead of the normal 'shear' pin that we have replaced a couple of times, this one was located under neath and farther back behind the propane tank.  But the found a way to get to it and replace it and the slide now is working correctly.

The the rubber trim gasket around the same front slide also had to be secured.  And the rear one was leaking a bit and they caulked and glued things so water would shed away.  Good to get the rubber trim fixed up.

After we finished with the carpet, we had Brett come over from Tiffin after hours.  Our hydraulic sync cylinder was and he replaced a pressure hose fitting.  Not a very convenient location. 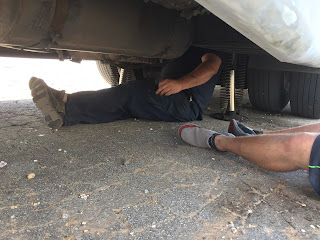 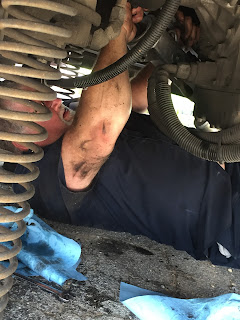 That was a couple of days work at Carl and Daniels MSRV Solutions.  They do great work at a fair price and we are glad to have found another good shop near Red Bay to get some work done.

Posted by Roadrunner Chronicles at 2:38 PM