As a former runner, I was reminiscing about how much I used to like being around races.  Back in the day, I could find a race to run about every other week.  That was when we lived in Hawaii in the late 1980's.

I ran cross country in high school only because the basketball coach wanted the team to go out for Cross Country so we'd be in shape when basketball started.  A buddy and I from the swim team decided to go for it and did OK, making the team, going to District and qualifying for the State Championships.

Golf showed up that fall and I found my true love and lifelong sport.  But I always admired the runners.  In the 1970's Jim Fixx wrote "The Joy of Running" and Bill Rodgers was a star at the time. And marathons began growing in popularity.  I liked running, but the thought of 26.2 miles was crazy!

While we were stationed in Germany (1980-1983) I saw a neighbor train and run for the London and Paris Marathons.  That idea began to grow on me and I decided to go for it during our next duty location - Honolulu.  Sure enough - I completed one there and then three more in Albuquerque during our four and 1/2 years there.

Now into my early 40's, I became more prone to injury and pulled a muscle while training two weeks before the Marine Corps Marathon in DC.  I ran a few more shorter races (5k's and the Army 10 miler around the DC monuments, but that was basically it for my running and racing days.

I remembered all those people on the sidelines and stations along the races who volunteered so the runners could get out there.  I decided to give it a try at the Virginia Beach Shamrock 8K.

I didn't want to be late for my 6:00 AM arrival at the Volunteer Tent so I showed up early and had a chance to talk with Mel at Orange Peel Shuttle.  He was one of 7-8 shuttle drivers going back and forth from the VA Convention Center to the Oceanfront. 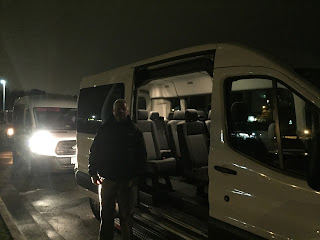 After check in I went over to my assignment as a 'Corral' helper over by the Start Line. 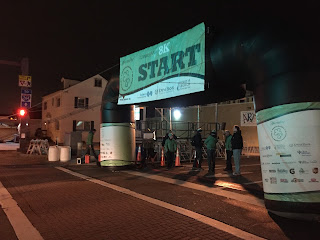 About 6:30 more volunteer showed up including this gentleman who was sporting his brand new Leprechaun outfit.  His talented wife made it for him. 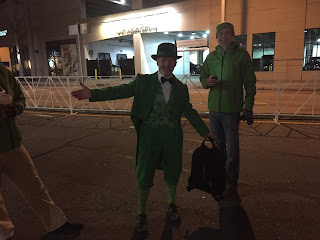 Going back from the start line, we set up the white fencing.  One thing about the race --- it was very organized.  These folks were pros.  They had done this many times before this one.  And they hire people to do it.  In this case J&A Racing was in charge. 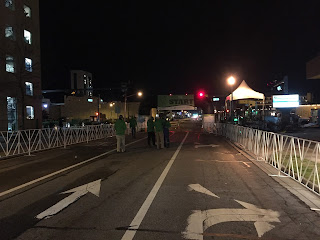 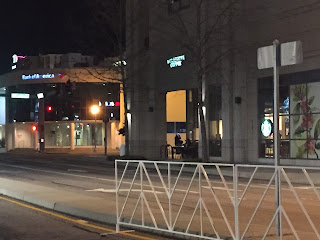 My station was back near one one of that last corrals.  'Corrals' were the groupings racers based on the information they provided during their sign up.  It went according to their estimated 'per mile' times.  It is a natural tendency to want to start up near the front.  The serious and competition runners were up in the front corrals. 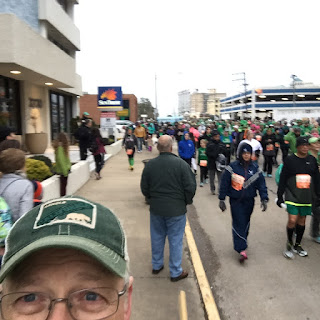 After we got set up I was at corral marker 14.  We had about 30 minutes before race start and it was fun to interact with racers and police and fans.  I must have talked to 6-7 folks. I talked with a VB police officer that was at the intersection explaining the road was closed to drivers trying to get to work and closer parking lots.

I also spoke with a teacher who was there with 15-20 Jr ROTCers  from a local high school.  They provided some entertainment as they went through their jumping jackets and loud cadence yells.  A racer from NC was there with her five year old and boyfriend.  I also talked with a grandpa who had a 16 month old, an Air Force retiree and his wife, etc etc.  It was fun to interact with folks. 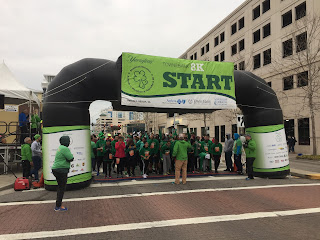 Every couple of minutes, each corral moved up and about 10 minutes after the start time Corral #14 was off! 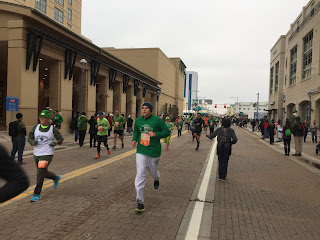 After being there for a couple of hours I was in need of the facilities... and I found some a couple of blocks away. 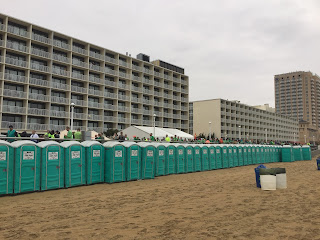 Later, down at the board walk not far from the finish line, a giant sand pile noted the event. 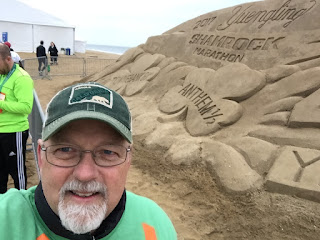 Despite the forecast of rain, it held off and we only had a few sprinkles. 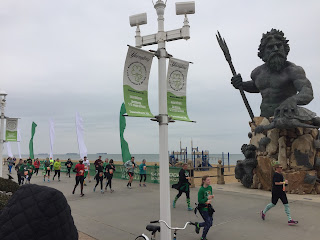 It was a fun way to spend some and get into the running spirit again.  I may do another one -- we'll see.