We are in Memphis for a couple of days.  Yesterday I got up my usual time and was at Starbuck's at 5:05 AM.  They don't open until 5:30 so I sat outside at one of their tables and did some personal spreadsheet finances work.  I was hoping to get onto their wifi but it wasn't available.  Figured they would turn it on after they unlocked the door.  But when I went inside they indicated their new Google Wifi was down and they called it in.

So, I went back to the campground which was 10 minutes away and started this post.  My Verizon MiFi was acting up, locked up and I lost the whole half a page of my post.  That was frustrating because I wanted to get some things done--Like getting a post out and starting my online work.  I switched gears and spent the next 4 hours doing real work online and basically got caught up.

During the day, I took a break long enough to walk over to a campsite where the vehicle had a "Fedex St. Jude's Classic" sticker on the side.  Uusally that mean's a professional golfer is driving the vehicle.
As I was on my way over, a guy and his wife with their small sleeping baby was approaching the 43' Newmar Mountain Aire motorhome.   I waved and he indicated 'just a minute' and then came out for a chat.
Sure enough - he is Martin Laird - 7 year PGA tour golf professional and fellow RVer. 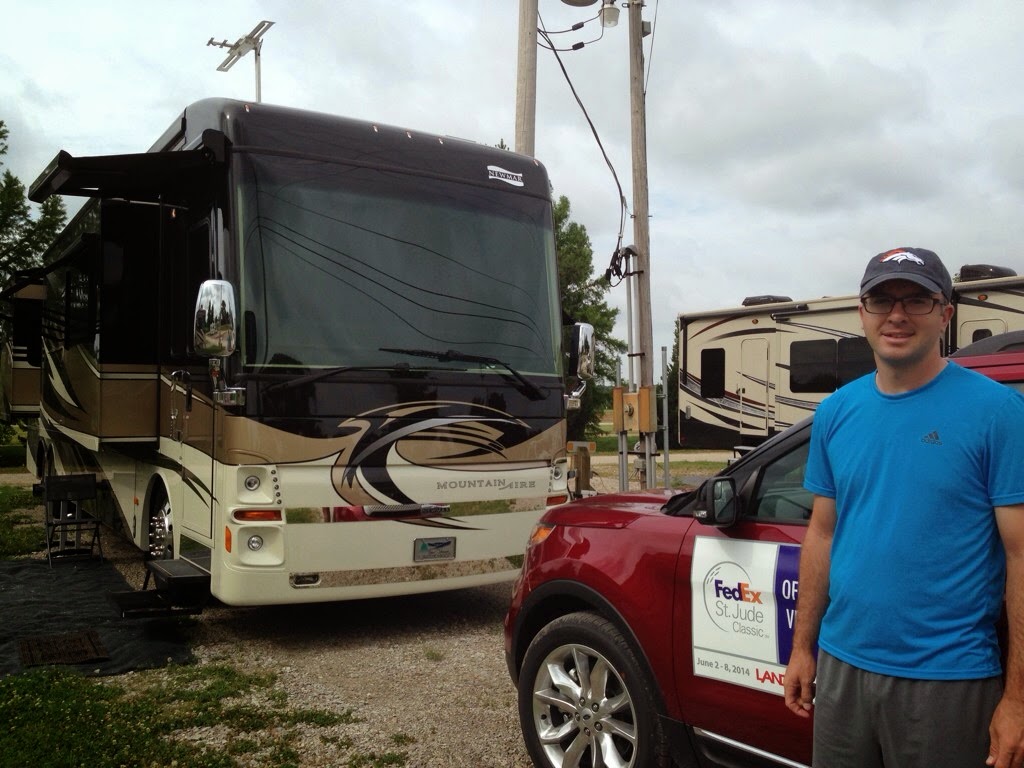 He was kind enough to let me grab a picture.  He had to play in the Wednesday Pro-Am so I didn't want to take any more of his time and went back to my coach.

Monday was quite a day for us.  We got a lot of woodworking and TV things done at Chris Berry's about 13 miles outside of Red Bay.  After we paid our Service Center bill ($119) and for our stay at the campground ($100), we went over to Chris' shop. 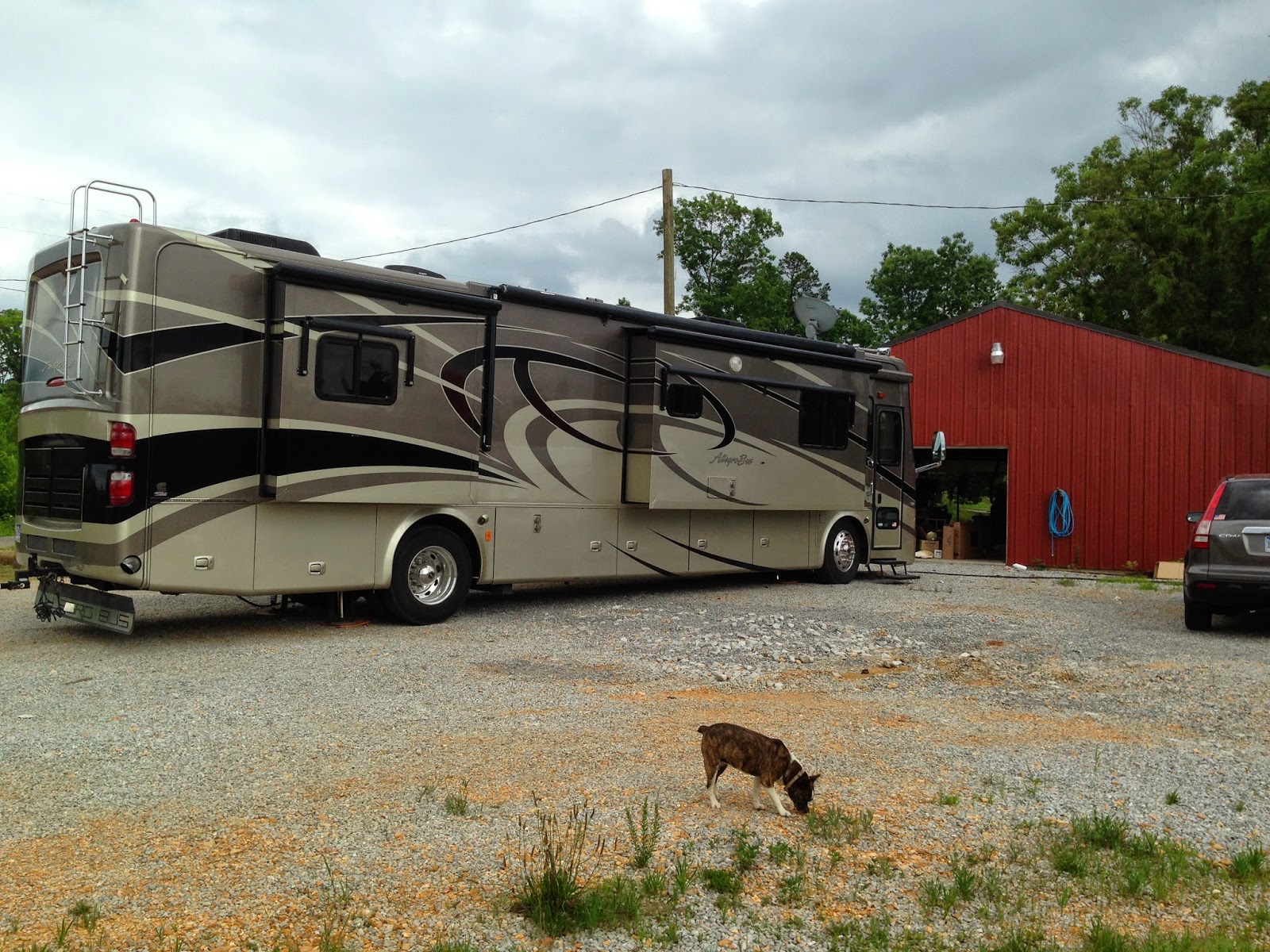 He has 50 amp service and we plugged in the Roadrunner.  Then we discussed items we needed his help on:


Pam and I left for the BestBuy in Florence AL, bought a 40" Sony TV and returned early afternoon.  Chris was finishing up making new drawers and replacing the old ones. 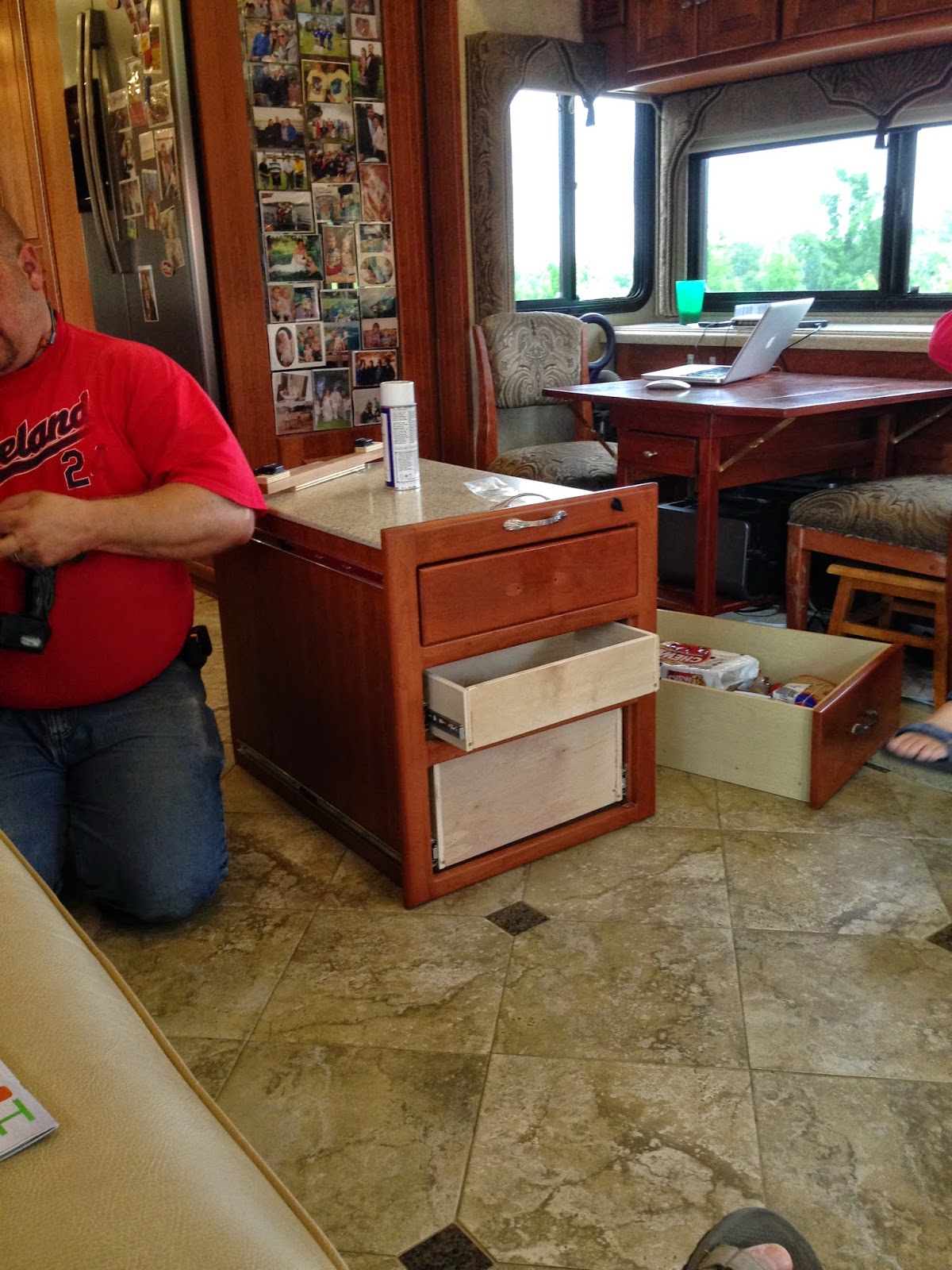 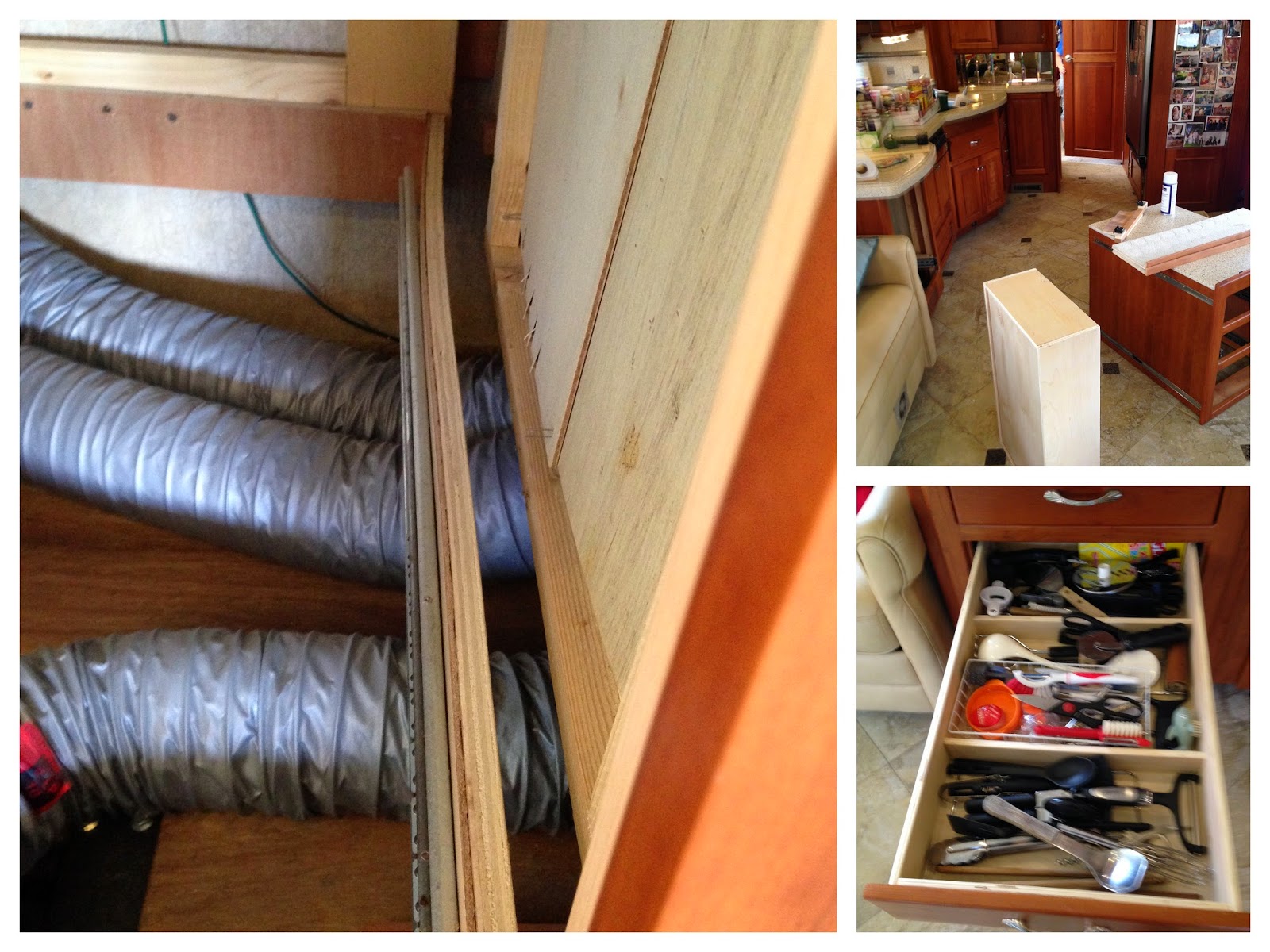 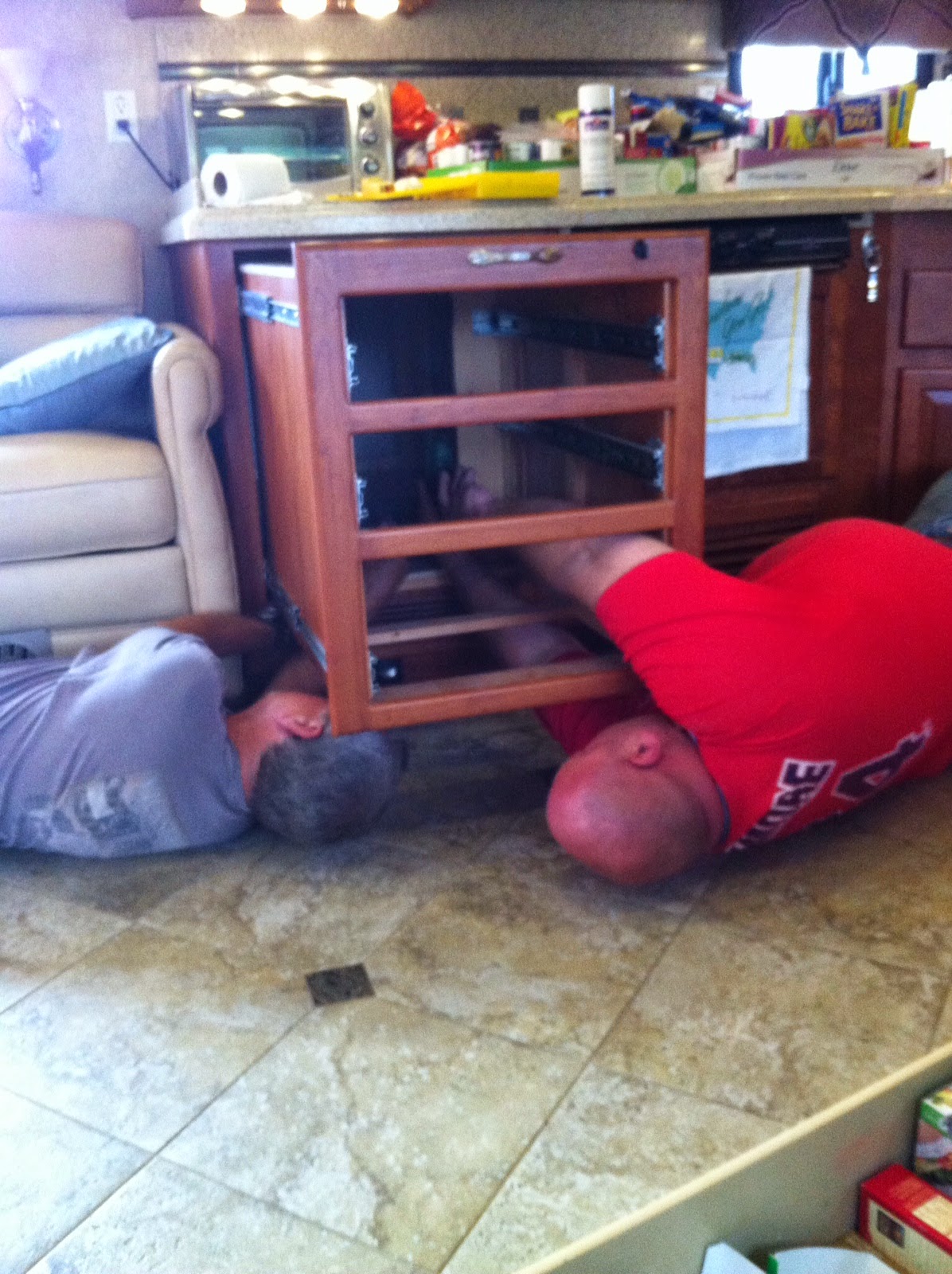 After lining up the door slides and the latches, remounting the front fact plates, we had new kitchen drawers. 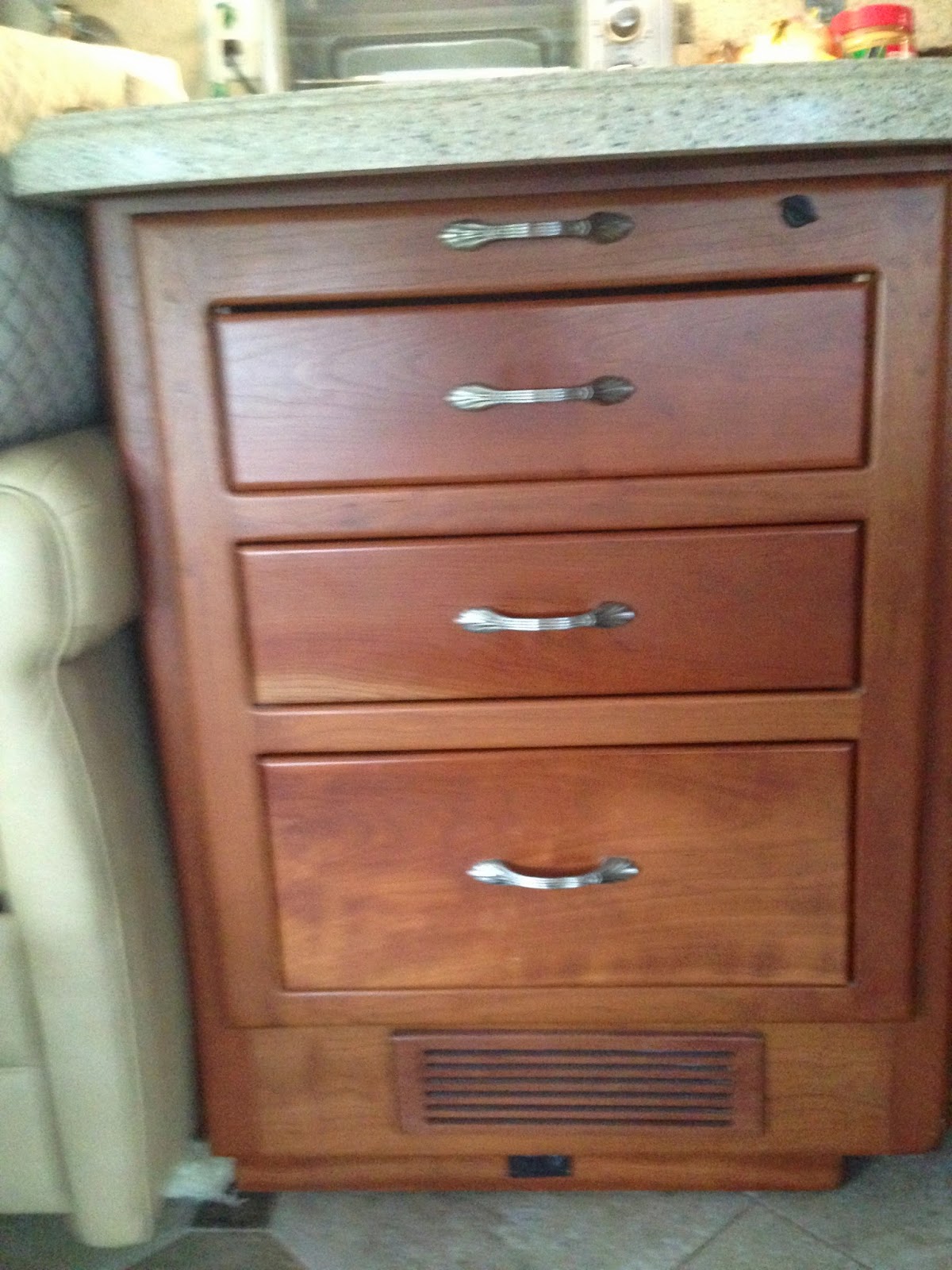 Next, he replaced the shelves including a larger piece of trim that serves as a lip so things won't fall out. 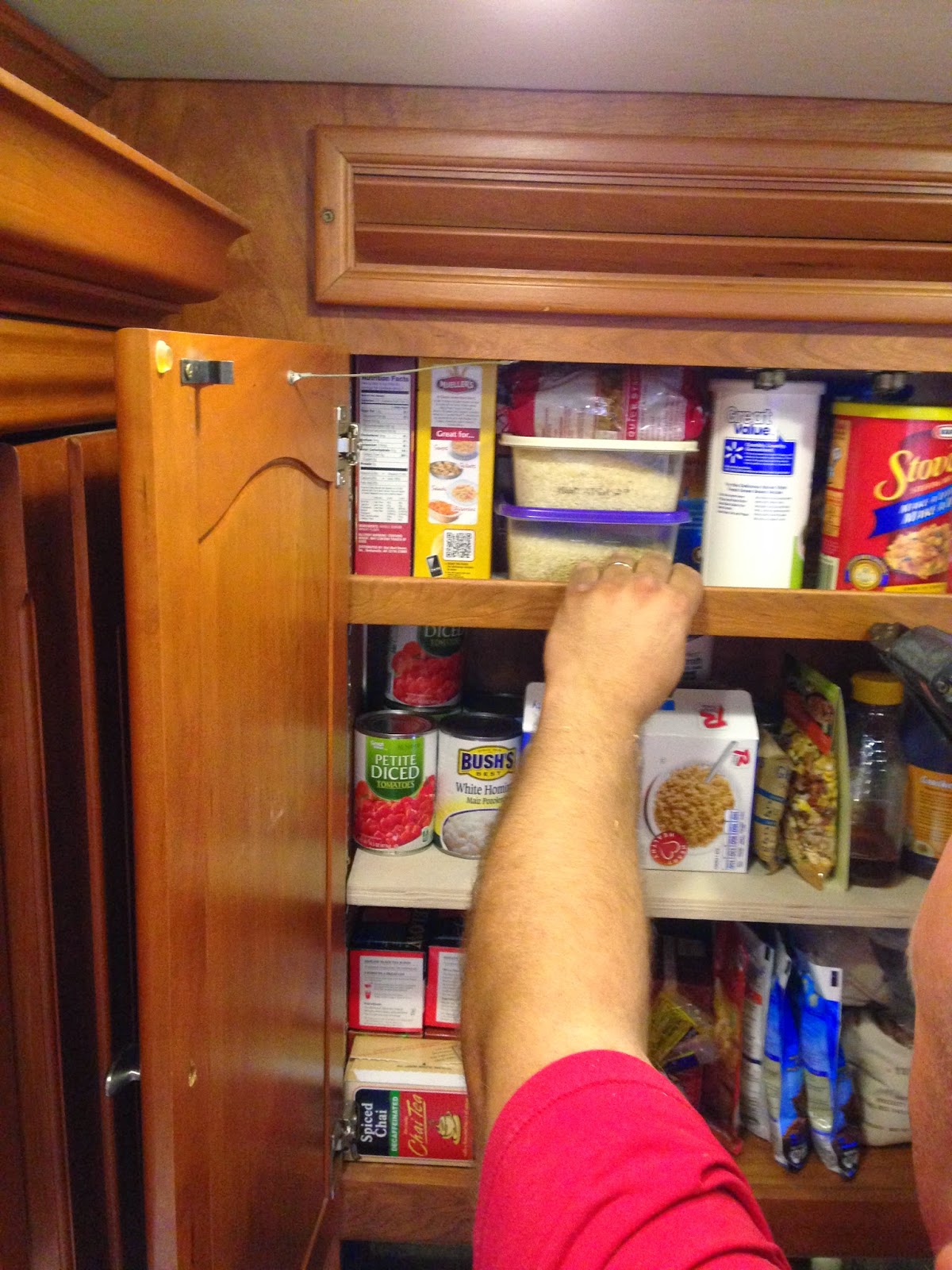 He also worked on the two vertical panels on the PS galley and sprayed the worn wood areas damaged by water near the shower and bathrooms sinks. 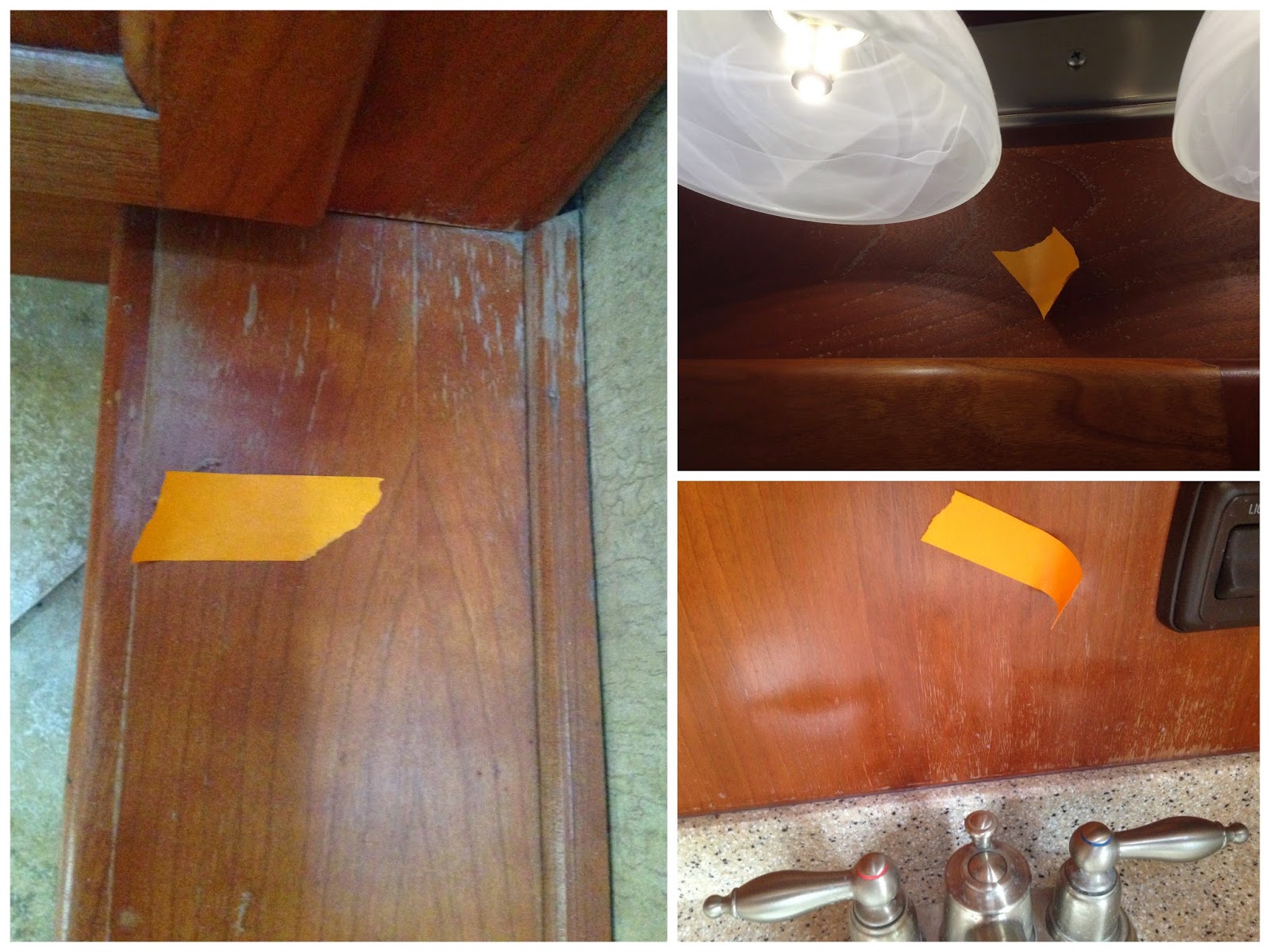 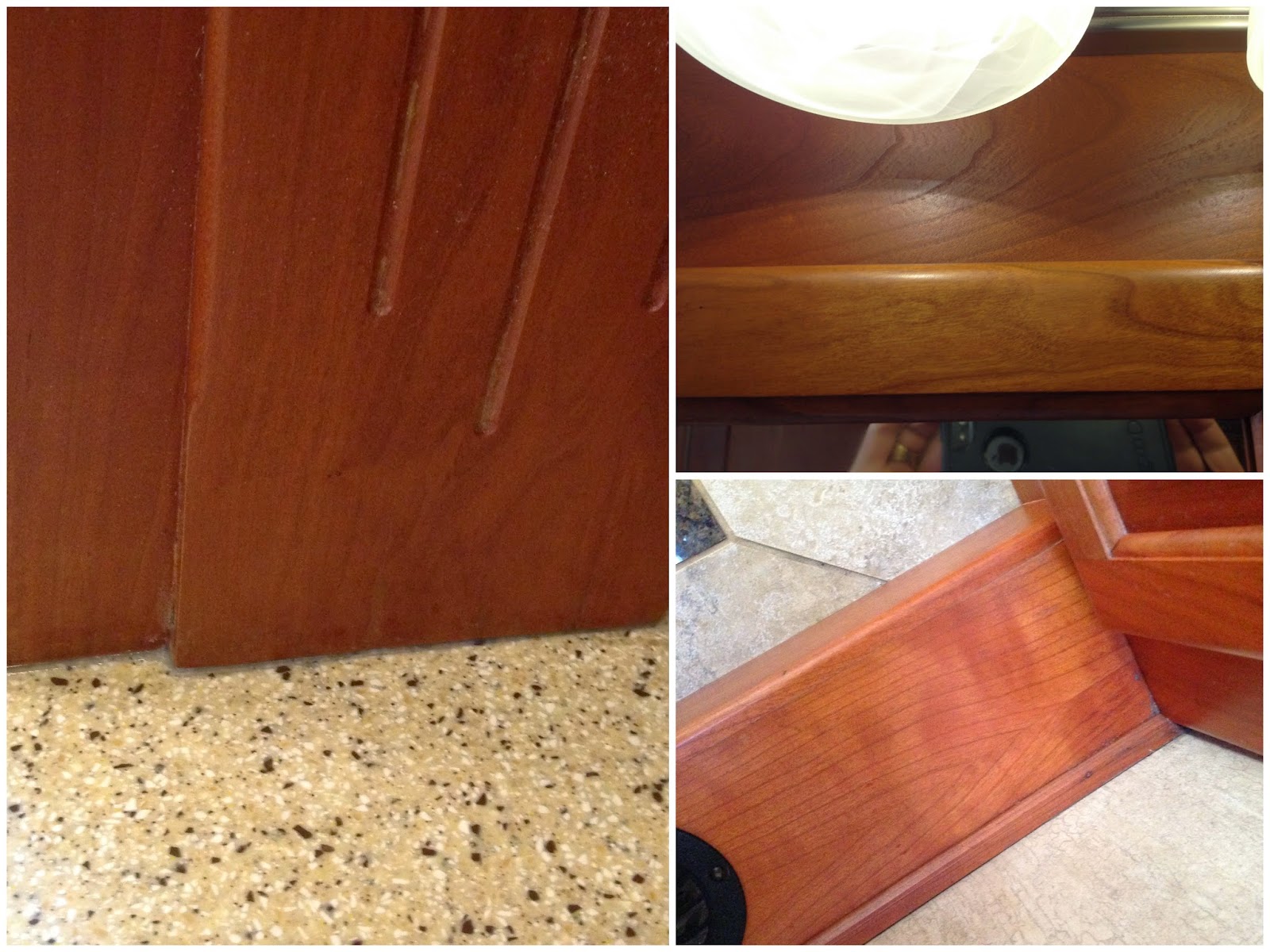 After
A little background. Two days after we bought the Roadrunner, we did not move the PS seat forward far enough forward and when the slideout was pulled in, it jammed against the PS chair.  It made an awful noise as the vertical panel tried to separate from its position. 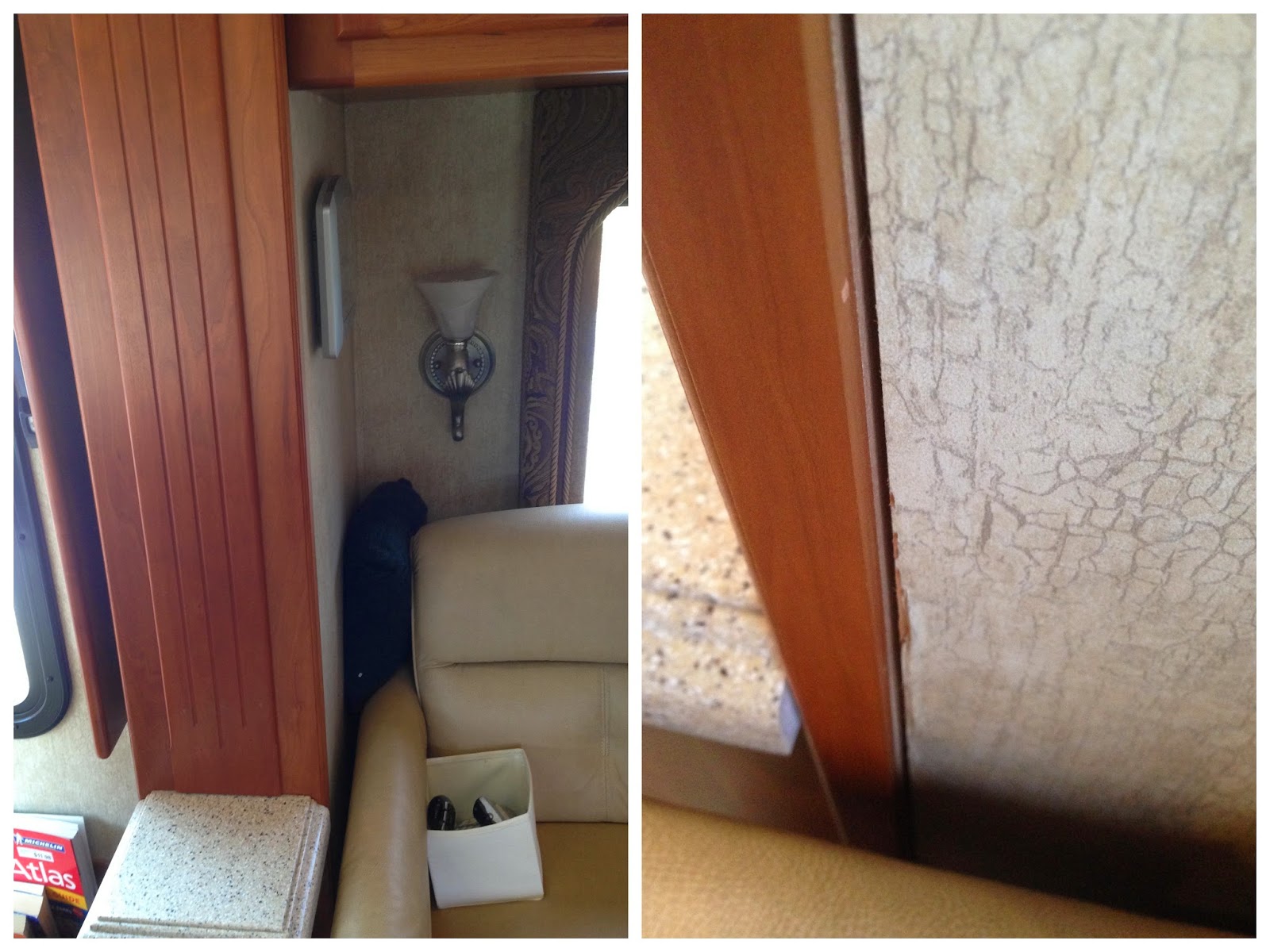 It did not come off, but it did split a little and has been a little loose for 5 years.

Chris fixed that by removing it and re-gluing it back as well as putting a couple of well place screws in place to draw it back together nice and tight. 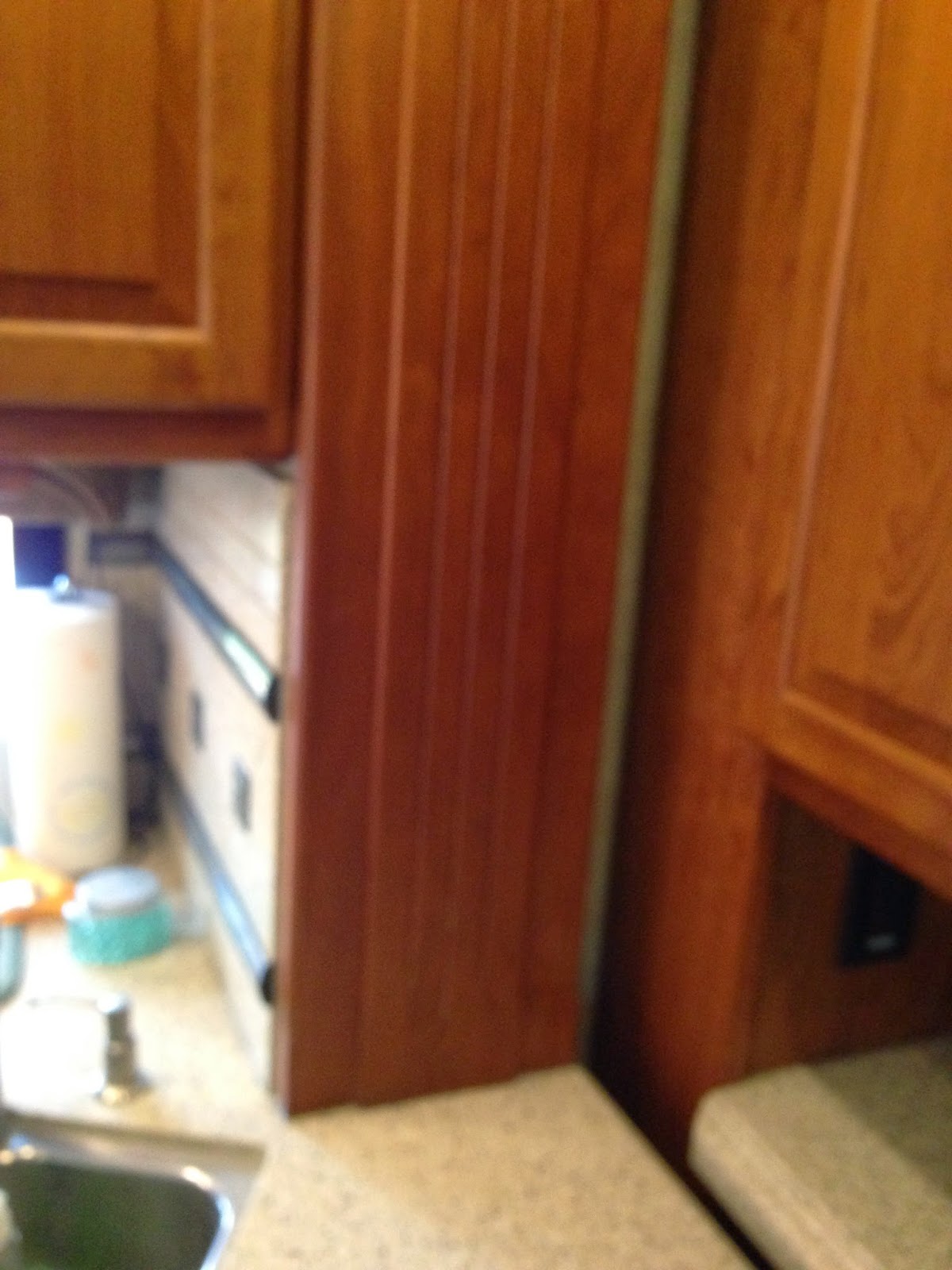 He also removed, sanded and applied some wood filler on the vertical panel near the kitchen sink.

The vertical piece of wood that covers the gap on the side of the Driver Side (DS) window shades was initially screwed into the wall.  But it two years of vibrating and no wall stud, it has come loose. 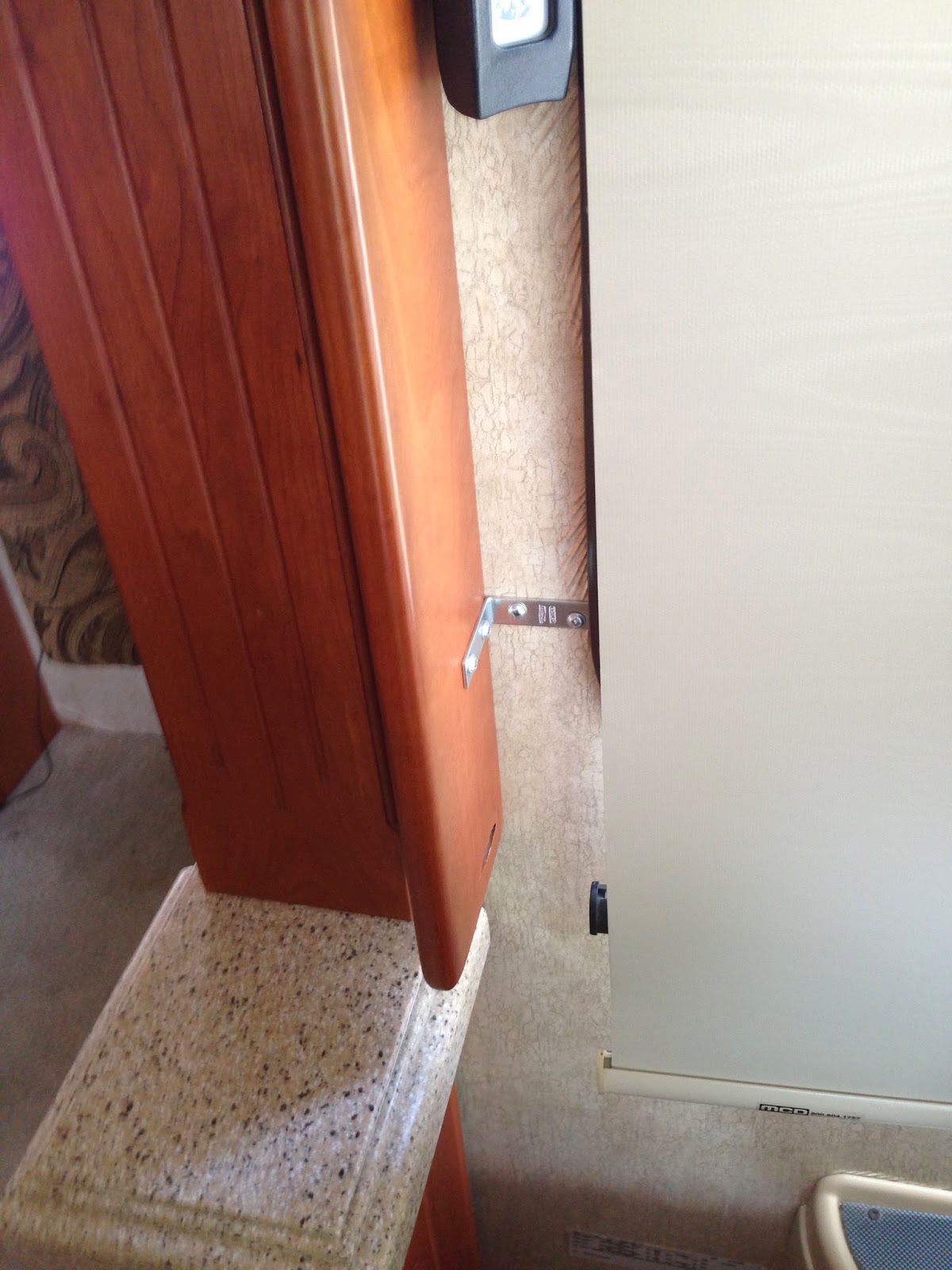 Chris attached a small L-anchor and was able to put a screw in the window frame to secure it.

Then he finished off installing the new TV.
From this 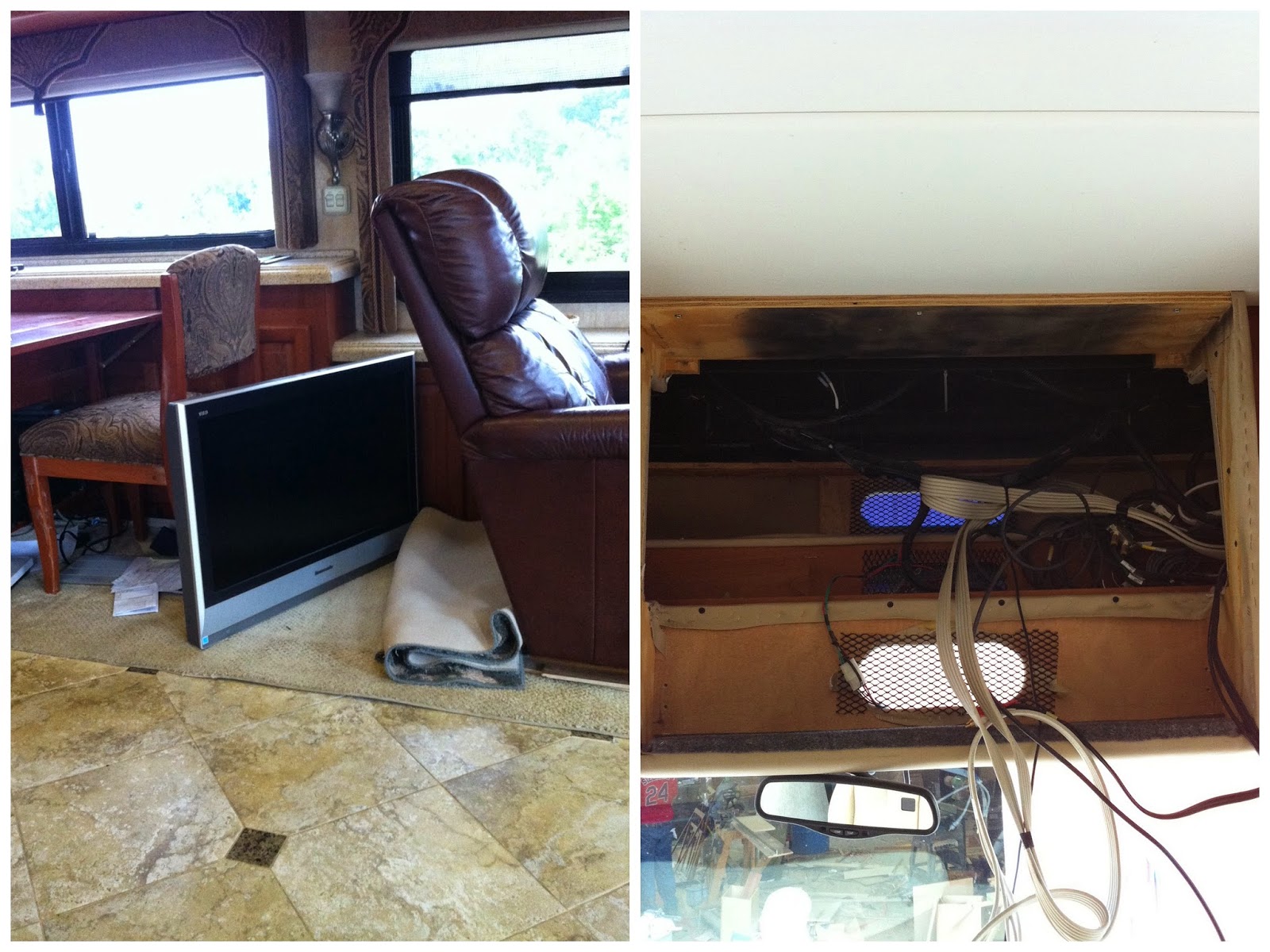 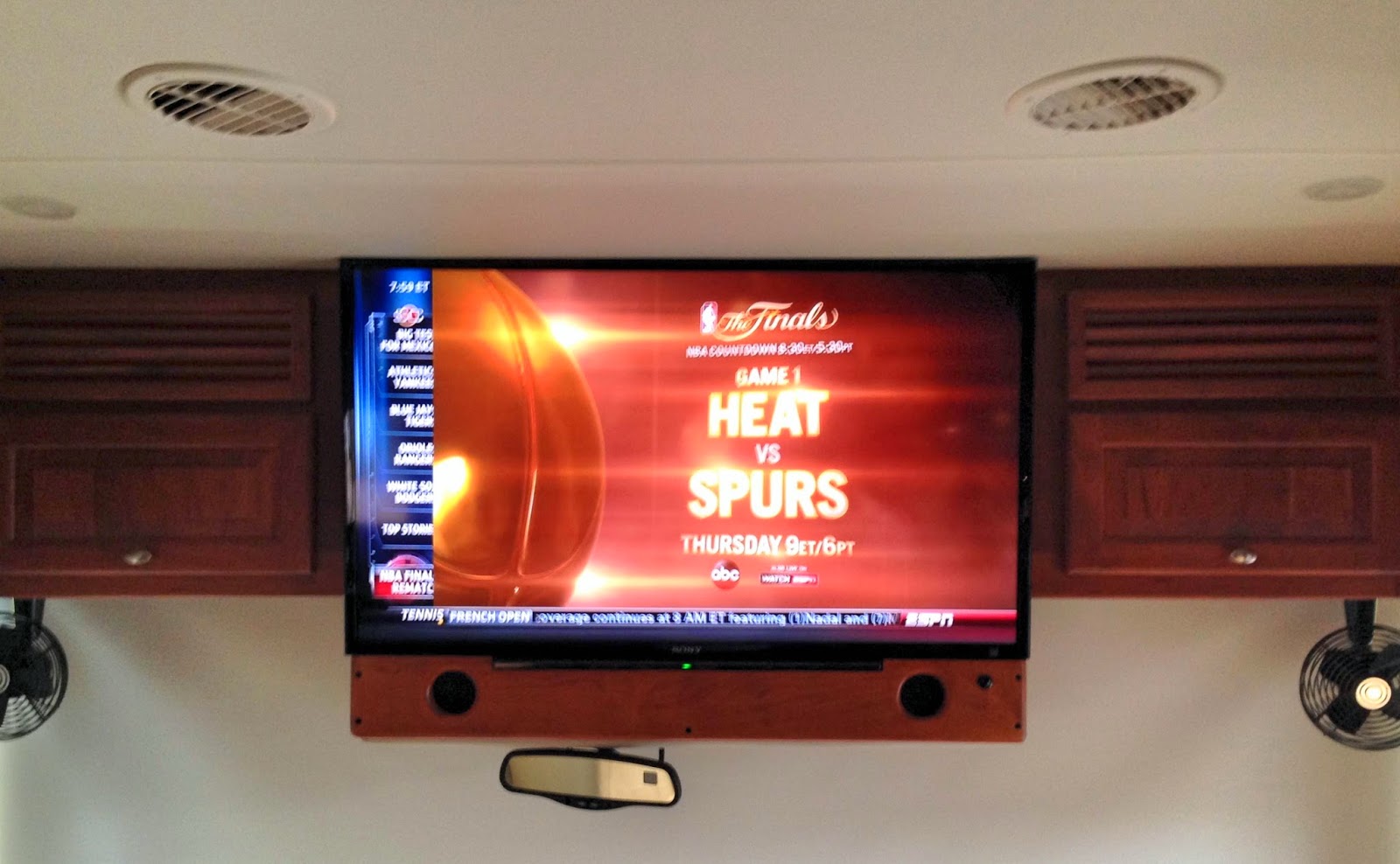 We have a bigger 40" picture, a newer HD system and Chris hooked up the Surround Sound.  Needless to say, we are enjoying this!

All in all, we got a lot of things taken care of and our time at Chris' added to the priority we put in maintaining and taking care of our coach.

It was another day well spent.

We drove to Memphis and like the campground.  Good for a couple of nights stay and close to the PGA golf tournament we are here to see. 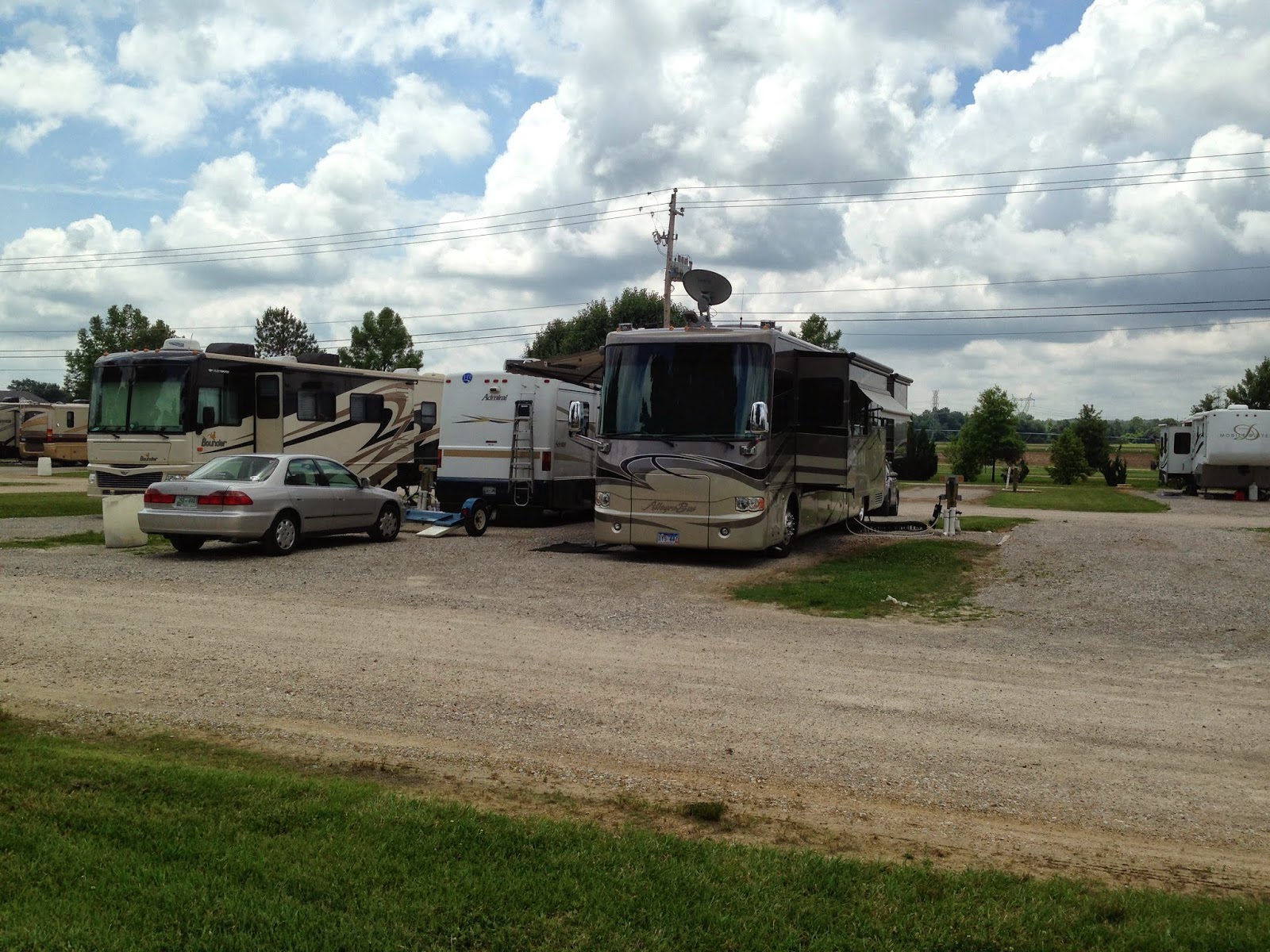