When we were at Cloverleaf 4H Campground, we passed signs to the Sebring International Raceway.  When I was growing up, I remember seeing something about the race on ABC's Wide World of Sports.  I wondered if this track was the famous one out in the middle of Central Florida?

Yep!  And we decided to wander around past the entrance and empty ticket booth and bleachers to see if there was anything going on.  Kind of like exploring…. ever done that?  Just gone to see what you can see?

Sure enough a car was making the rounds around the track getting some test trials in.  You can't see much from the parking area.  It is flat. So we parked near 6 or 8 other cars and went up onto an observation mound. 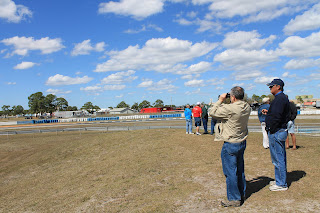 And a car was on the track and going around what looked like a smaller version of the track.  It was not the entire big track - just enough to get up to speed before some tight turns.

I found a map online. 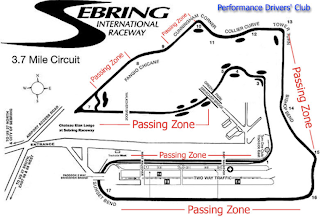 I think we were up on the top half of the track.  They had it partitioned off so the the car went from turn 11 back over to turn 4. 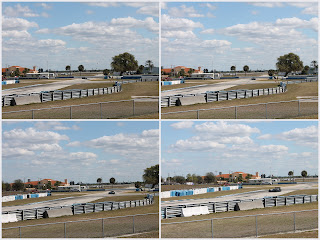 One thing about watch a fast car go around a small track - each lap looks a lot like the last one.  He hugged the same corner and drove up against the same edge of the turn time after time. 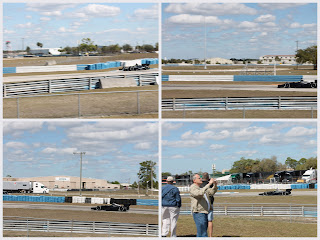 After a few minutes of that we decided to go to another vantage point. 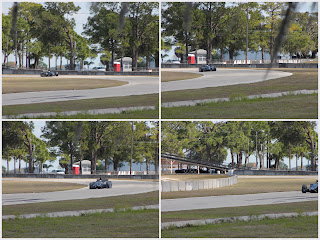 It was hard to keep the fast car in the frame at times…good thing for the 'continuous' button on the camera.  One fun thing was seeing a couple nearby who had a rented RV.  Patrick and (forgot her name) are from Switzerland on vacation.  They rented their rig out of Miami and were driving around doing the same thing we were doing.  Exploring. 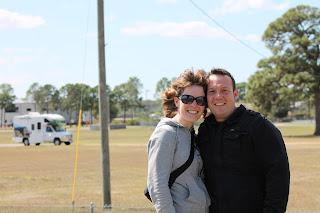 And we saw another cool car.  A couple of guys brought folding chairs to watch the trials. 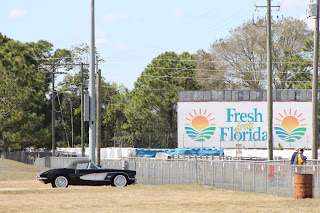 On the way out we passed the grandstands and saw the winners banners from 1952. 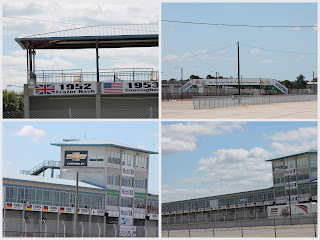 And some of the company trucks in the distance. 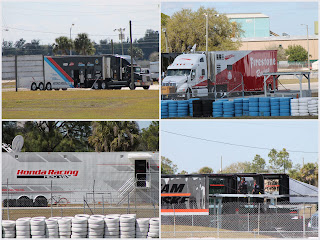 For a place with limited access, it was fun to see some Indy Car action up close.  A real bonus on a day 'just out exploring'.

Thanks for joining us on the Roadrunner Chronicles!  Leave a message and say 'hi' - its always nice to know who's out there!

Posted by Roadrunner Chronicles at 7:14 AM