Florida Days and Some Roadrunner Damage

Since we left Key West a few weeks ago we have spent time in Fort Meyers/Naples and have moved on to the SpaceCoast - eastern side of Florida.  We spent a little over a week at Patrick AFB.

Two days after we arrived, they had a FamCamp chicken and pork BBQ lunch for all the campers.
They really put on a spread and it was a nice gesture.  The campers and campground staff are all very friendly and helpful.

We also got to play a round of golf on base and see an old work buddy that I knew in the Air Force years ago when we lived in Hawaii.
Another highlight was having lunch with Howard and Linda Payne (rv-dreams.com) who were staying up near Cocoa Beach.

The campground at Patrick AFB is on a cove and we watched the sun go down one evening. 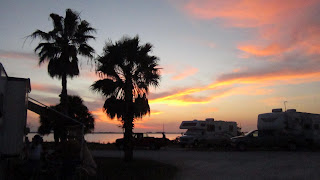 Then we saw schools of dolphins playing around.  I tried to get a shot of them jumping in and out of the water but could never time it right. 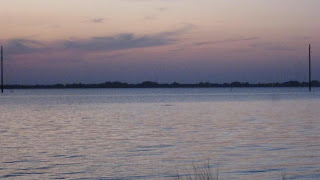 We also got to see friends from Albuquerque who now live in the Orlando area and went to church with them and had lunch at their place on Sunday.  It was great to see them and catch up.

The big event at our time at Patrick was moving from the overflow area in the campground to a site with electricity.  I pulled up along side a roped off area, then backed up a little and turned it too wide.  My right front end swung out and I hit one of the 'little 4" x 4" posts that was holding up the rope.  It was only about two feet off the ground.  I knew it was there but could not tell exactly how close I was to it.  Even though I was going slowly, before I knew it I had knocked it over.  It was wedged along the passenger side in front of the stairs.  When I figured out what was going on I stopped and got out.  The damage had been done and it was not pretty. 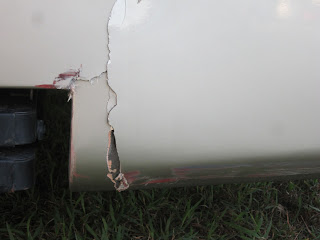 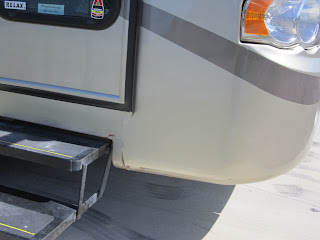 Now we are in the process of getting an estimate and deciding if we can get it fixed here or if we want to go back to Red Bay.  We found a shop but he is not real sure how to work around the 3M 'clear coat' (Diamond Shield - like finish).  He can repair the fiberglass OK but it gets tricky when you mess with the plastic coating.  If you peel it back it could lift off the paint under it in an area that is not damaged.  So we will see.
It doesn't look too bad but the estimate came it at almost $2600.  On our deductible with Allied Insurance it would cost me 800.  That seemed a little high to me.  I think we can drive it the 700 miles back to Red Bay and get it fixed for a about the same price as the deductible.
We should know which way we are going to go on this sometime today and will have an update on the next edition of the Roadrunner Chronicles.
Thanks for joining us today!  Hope you are having a good week.
Posted by Roadrunner Chronicles at 5:52 AM