Selling and Delivering the Roadrunner to New Owners

A little over a week ago, we completed the sale of the Roadrunner.  It started out slowly with an email on December 31, 2018 and culminated in getting the deal done 43 days later with the new buyer. 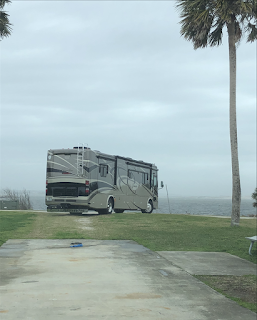 A friend with the same year, make, and model motorhome sold his in December and asked if he could pass along our contact information to a couple of people who were interested in his coach.  Soon after, I got emails from both individuals.

Thing happened a lot quicker than we planned.  We decided to put the Roadrunner up for sale after out winter trip to Florida.  That would be the first or second week in April.  But since this opportunity presented itself, we figured we could change our plans if things worked out.  After all, “Two birds in hand are worth three in the bush,” ... or something like that?

We never had to advertise the Roadrunner or contact a consignment agency.  We're calling it divine intervention and are as grateful as we can be.  It turned out to be a "win-win" for both the buyer and for us. He got a great coach for less than what he would have paid at a dealership and we got a little more money than many said was possible.

We traded emails back and forth with the two interested parties in January.  I sent each about 30 pictures of the Roadrunner and answered a lot of questions.  One was concerned about the price we were asking and the high miles we had on the coach.  Both of those items I understood.  Our 2007 Allegro Bus had 130,000 miles on it.

When we were in Red Bay after Thanksgiving, I talked with a motorhome broker who said that the two factors that he and most RV dealers consider were simply, year of the motorhome and miles.  Those two factors determine what they are willing to pay an owner for a used motorhome.   He said we would be fortunate to get $85,000 or $90,000.

As owners, we felt our motorhome was in great shape, had minimal issues, and worth top dollar.  We had put a lot of work into keeping it running well and looking good over the years.  May a lot of upgrades. Our original sales plan was to take the Roadrunner back to Red Bay the first week of April and get some odds and ends/minor work done, then park it on a lot there and see what happened.

That plan never materialized. Instead, we cleaned out the coach and got the Roadrunner ready to turn over to the new owner.  Every step of the way, we knew that for one reason or another, the sale could fall through.  Our situation was unlikely from the start but just because we had some unique circumstances to navigate, "unlikely" doesn't necessarily mean, "not possible."

A week before the new owner flew in to see it, we rented a 4' x 8' U-Haul trailer and packed it full of everything we could not carry in the Honda CRV.  We were already were traveling light since we left a lot of our things back at our daughter's place in Virginia Beach before we started on the Florida trip.
For less than $100, we rented the trailer and drove to Virginia Beach for a few days.  It coincided with our youngest grandson's 2nd birthday which was great.

Meanwhile, we were continuing the correspondence and figuring out a viable "change or ownership" plan.

Some of the hurdles we had to get over were his situation and modifications to the Roadrunner.  He was flying in to look over the coach.  Then, if it all worked out, we offered to help him get the coach to a storage facility which was about eight hours from where we were located.

A number of things had to be addressed:
- High miles of coach
- Age of the motorhome
The broker suggested we ask what we wanted to get for it and see what happens.  Our friend with a coach like ours did that and got more than we did.  But then, he also had a lot less miles than we did.  I think anyone who shops around can see that there are a lot of 11 year old RVs that have not been taken care of very well.  We tried to keep up with things and have made something like 17 trips to Red Bay over the years to stay on top of maintenance and improvements.  We felt it was better to get a few things done each time than pay a big bill all at once.

- Washer/dryer addition
- Lack of table/eating area
- Keeping the recliner
- Purchase price
The buyer was always complimentary when I sent pictures and I ended up forwarding about 75 in total.  Two items on his list were that wanted to install a washer/dryer and to reinstall the Corian table.  We did a little bit of research and offered some recommendations with a couple of shops in Red Bay who could get that done for him.
I also wanted to keep the custom table and the Lazy Boy recliner we had in lieu of the sofa we had removed on the Driver Side.  He was OK with all of those.
After about 10 days of discussions on "how this might work" I thought it appropriate to agree on a selling price.   Better to see where we were in the process than get down near the end only to be surprised.  It only took a couple of emails and we agreed on a price we were both happy with.

- Meeting at the airport hotel
- Test drive
He was flying into the Jacksonville Airport late on a Saturday night and then taking a shuttle to an airport hotel.  We met the next morning at the hotel and drove him back to the campground at Naval Station Mayport.
We took a tour of the outside and then the inside of the Roadrunner, where we went through all the details of operation.  Inside the coach, Pam and I explained the operation of all the systems moving from the front to the back and answering all his questions. Next, Pam explained the procedures for shutting down the DirecTV, pulling in the slides and getting the Roadrunner ready to roll.  I then went outside with him and showed him what I do with the hookups and putting away things.
After that, he and I went for a test drive around the outskirts of the base.  He did fine and carefully returned the Roadrunner back to the campsite so we could connect the Honda CRV.

- Transfer of funds
- Bill of Sale
- Transfer of Title
We did our due diligence to verify that he could get an official check made out to me that I could deposit online using the USAA mobile app.  We are both USAA members. I thought a simple transfer from his account to my account would work.  Instead he had a check drafted that could not be changed or cancelled for 90 days.  A friend in the tourism industry said that some unseemly folks would pay for their tickets by checks and then turn around and cancel their checks.  The USAA procedures in place prevented that possibility.
After the test drive, we signed two identical copies of the bill of sale with two witnesses at the campground office and then filled out the Transfer of Title.

- Departure from Naval Station Mayport
- Arrival at KOA for the night
- Dinner at Cracker Barrel
- Sleeping arrangements
By now it was about 1030 AM.  We hooked up the tow car (Honda CRV) and headed for a KOA off I-75 where we had made reservations for the night.  After a couple of hours on the road, we pulled into a truck stop for some fast food.  He was able to drive the coach for over an hour on the freeway so he got some time behind the wheel.  I liked the idea he got the chance to drive it around base and also out in some traffic.  He did fine and liked the way it handled.
Our stop at the KOA was about 3 1/2 - 4 hours away from Mayport.  The delivery destination (the next day) was an RV storage facility east of Atlanta, another 4 hours away. The overnight stop allowed him to set the unit up at the campground while we were there to answer any questions.  Next, we went out to dinner together and drove back to the campground.  We had bought him a sleeping bag and pillow and we found a motel in town for the night.  He was able to check out the DirecTV by himself plus everything else inside the coach.  When we met the next morning we answered a few questions but it went smoothly.

- Departure for Atlanta-Hartsfield Airport
- Rental Car
- RV Storage
- Adios
He had breakfast of bagels, orange juice and coffee that we had in the refrigerator for him and we grabbed something at the hotel.  We met early at the KOA and he did all the departure set up and procedures with some minimal coaching.
Our next "stop" was the Atlanta-Hartsfield Airport.  He had arranged for a rental car.  We looked up the airport information online and made sure we would have no problem driving the Roadrunner to the airport.  I could not imagine that it would have any low hanging walkways or overpasses that would be a problem.  We checked it out but also kept a keen eye for some surprises along the way.  We had no issues.  As we approached, I slowed and pulled over near the parking garage, and put on my flashers for 30 seconds.  He hopped out and went on the rental office.  We exited the airport and drove 30 miles over to the RV storage facility.  He met us there shortly after we arrived.  We removed our license plates, unhooked the CRV, took one last picture, said, "Adios Roadrunner, it's been amazing!" We shook hands again with the buyer and we were off.

The end of an era.  It was a bit surreal as we drove to the nearest Chick-Fil-A for lunch and pondered our future...

Thanks for joining us on the Roadrunner Chronicles.  There are more stories to come, be sure to tune in!

Posted by Roadrunner Chronicles at 9:46 PM