Friends from the Beginning and Now

I started dabbling in the blog world back in 2007.  We went full-time in May 2009.  During that time I started writing about lots of things in order to learn how to do.  The aim was to have a running documentary of how:

But there are a lot of gaps even with a blog...

We met Ron and Jan through mutual friends but not sure exactly when that was.  We started attending Barcroft Bible Church in 1995 and it may have been that year.  For some reason, our paths never crossed much and we moved on to a different church.  A few years later we also recall seeing them at Lake Fairfax in 2009.

Turns out Ron and Jan also have a motorhome and moved to the Seattle area about the same time as we started full-timing.  After 5+ years there, they moved on to Arizona before ending up here in Florida.

Last week we were at the Tampa RV show paying for something at one of the vendor booths and Jan said, "Hi! didn't know you guys were coming to the RV show!"  We turned around and there they were.  It had been years since we had seen them. We spent 15 minutes chatting and catching up and were glad for our unplanned encounter.

We made a note to get together for dinner and last night it happened at Ford's Garage.  I didn't recognize the name but we realized there are a number of these restaurants all over Florida.  Pam said we had been to one of these restaurants before and I had no recollection. 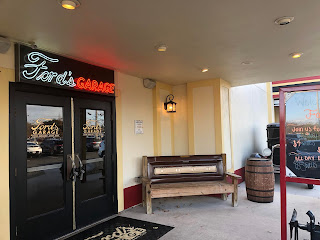 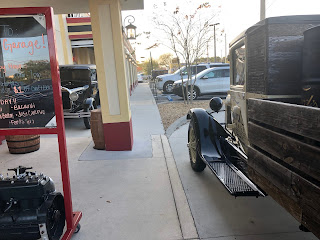 We all arrived by 5PM and then spent a couple of hours over dinner catching up and hearing about how they chose to live in Florida.

They love it here and are actively involved in the community including serving regularly at a local food bank for the homeless.  We shared stories of RVing in cold weather, being in Arizona and heard also about their work with the creation and operation of Jill's House in McLean, VA over 10 years ago.

As we talked we remembered the time we saw each other in a large church.  We were sitting near each other but had never met until then.  We didn't plan the meeting but it happened.  We saw them again a few months later at the Lake Fairfax where we stayed with our new coach for a few weeks.  They were there before they hit the road to relocate in the Seattle area.

Then, fast forward 10 years to the Tampa RV show and another unplanned meeting!  They were there at the beginning of our full-timing days and now what appears to be the last couple of weeks of it.  How fun is that?

It was great to spend time with them again and we'll be looking forward to the next time.  Thanks for joining us today on the Roadrunner Chronicles!

Posted by Roadrunner Chronicles at 9:16 AM