Visit to the Fire Station

Who doesn't like a visit to the fire department?  Especially if you know a fireman?

We are fortunate to know Reggie, who is the Fire Chief in Yorktown.  After our visit to colonial Yorktown, I got a text from Reggie who asked if we were still in Williamsburg and would like to come over and see where he worked.  Yes, we would!

We've known Reggie for 3-4 years.  He and his wife Melanie are friends of Kelly and Jon.  They have an 8 year old daughter and a 3 year old that is buddies with Brooks.  We see them when we are in Virginia Beach visiting.

I always enjoy it when I get to see the actual place where people work.  It is one of those interesting things about life.  Everyone makes a living somehow, in some place and its fun to put them together now and then. 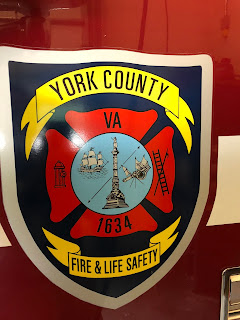 We were about 20 minutes away and drove over to the Fire Station and met Reggie in his office. 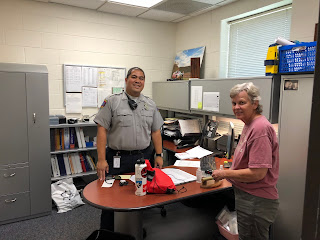 He has done this before and reminded me of when I give people the "tour of the RV".  Reggie used to ride the firetrucks and be on the line, but as a Fire Chief now, he has his own EMS truck and rides to the scene in it. 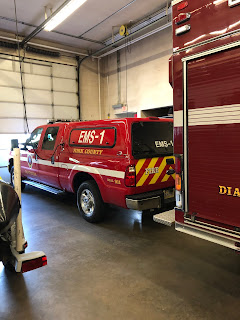 The first part of the tour was the pointing out the Men's and Women's separate facilities and the common area where they spend a lot of their free time while on shift.  We caught Reggie and the team in the middle of one of their 24/7 shifts.

The next part of the tour was about the trucks and the equipment.  Each firetruck has a specific purpose and role. 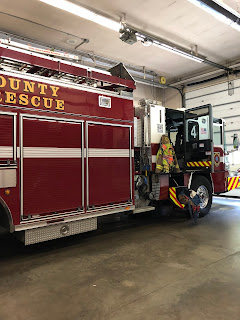 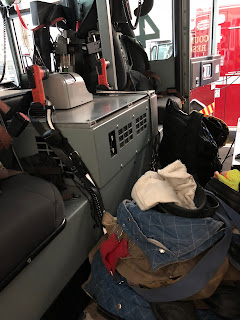 This looks a bit cluttered but in fact, it is pre-arranged so the fireman manning this position on the truck can jump into his boots and suit in seconds.  The big unit is manned by four fireman.

This beast is the most impressive of them all.  I forget all the facts and figures of this but it can carry a lot of water.  It also has lines of hoses and then can pump water to the fire using a variety of sources.  Sometimes they get water from wherever they can including a swimming pool if necessary. 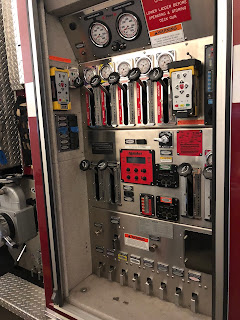 Whoever is manning the pump has a lot of responsibility.  This can get tricky making sure the right hose has the right amount of water to get the job done.

On the passenger side rear area is a compartment with a familiar set of tools which is commonly known as 'Jaws of Life'.  That is a brand name that became the generic label of a particular kind of equipment. 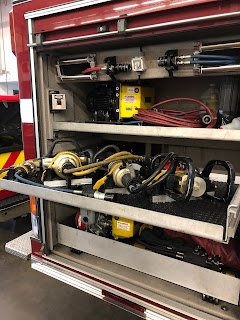 I believe he said this brand was made by Genesis.  It has hydraulics to aid the cutting and even has a portable motor to carry a pretty good distance from the road to free a victim.

Next, we looked at one of two ambulances they have ready to go.  He opened the back door and had me pull out the gurney and set it up outside the back of the truck. 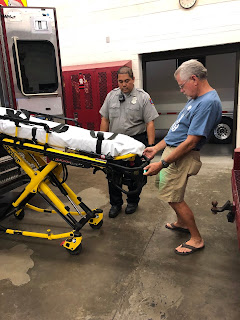 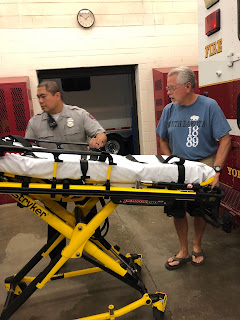 It is all automatic.  Just press a couple of buttons, give it a tug, lock it in place and set it up, wheel it away.  Reducing the time it takes to get this in and out of the back end of the ambulance saves precious minutes in an emergency.

They have two different large 5th wheel trailers that haul all kinds of rescue and safety equipment to the scene.  It is pulled by this large truck. 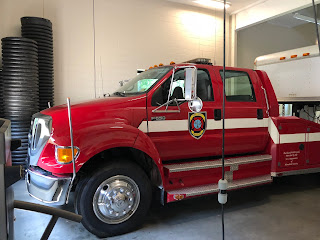 The side of the trailer opens with all kinds of equipment they can bring to bear on different situations. 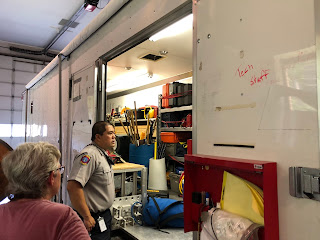 It's a little sobering to think about how much the firemen need to know about some many different kinds of equipment.  Then, too, they have to keep in great physical shape and have to learn to deal with awful kinds of situations.  Those of us that don't, probably take them and their work a little too much for granted. 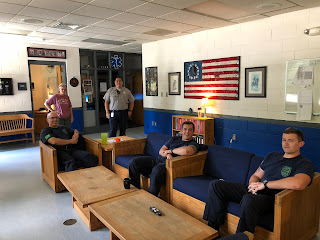 This is a good reminder of what real heroes look like.  Day-to-day they are regular looking folks.  But in an emergency, they are highly trained professionals that put it on the line every day.

It was a real privilege to see the fire station and get a private tour from Reggie.  And to get an inkling of what it is these folks do for us day after day in our communities.  And not only our communities, but sometimes they deploy to other places to join other teams.  Such was the case when Reggie deployed to Puerto Rico last year during their terrible hurricane.

That's it for today's Roadrunner Chronicles!  Thanks for stopping by.

Posted by Roadrunner Chronicles at 6:56 AM