After our short trip south to see friends near Charlotte NC, and to get some yearly maintenance done on the Roadrunner, we found a campground in the

spent the 4th of July camped in Newports News city RV Campground.  It was the closest campground to Virginia Beach under $40.  $36.04 in fact.  So, that was a plus.  We drove over to Kelly and Jon's place in plenty of time for the Thoroughgood neighborhood parade.

Kelly did a put some planning and decoration into the chariot the boys were going to be riding in. 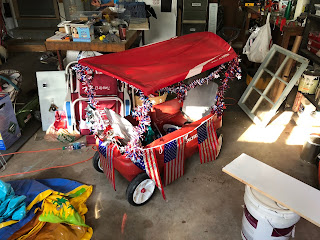 The boys were ready to go and we were all decked out. 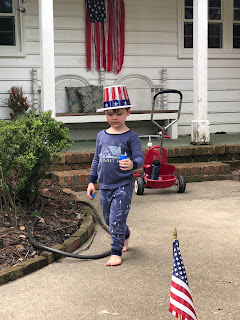 Brooks tried out his hat before he changed into his parade clothes.  The hat didn't last long so papa, the wagon-puller wore it. 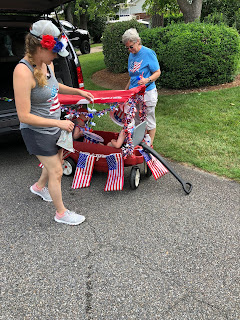 The boys got loaded into the wagon at the drop off area. 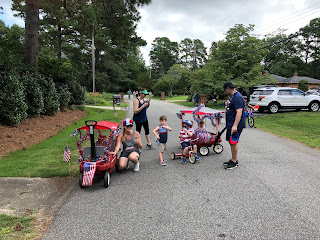 Brooks stayed in the wagon for a few hundred yards, then was excited to see a pal of his riding his tricycle.  From that point on around the parade route Brooks ran ahead of his buddy on the trike.  Those little guys sure have a lot of energy.  Harrison had a more reasonable approach and enjoyed the proceedings from his seat in the wagon.

It was fun chatting with the parents of Brook's friend and taking the long walk around the big block.  It seemed as if families were gathered at every couple or three houses and they waved and talked as we walked by.  On group were sitting across the front lawn in their fold-up chairs and having a good time and had a giant jar of water set up.  They invited paraders to stop by and get a drink of water which was a nice thing to do.

About 100 folks stayed at the Thoroughgood House for the hot dogs and noon day meal/picnic.  We returned to Jon and Kelly's house.

The boys had a bug earlier in the weak but got over it fairly quickly.  Jon got up early that morning, put pork butts on the Big Green Egg and promptly went back to bed where he stayed all day long.  The time or two he emerged from the bedroom he didn't look too good.  Kelly started feeling poorly shortly after the boys went down for naps and then the bug hit her.  Pam and I were on our own when the boys woke up.  Gladly, it was no big deal, we just played with them and fixed dinner, read some books and put them to bed.

Kelly and Jon felt better on the 5th though not 100%.  They got better as the day progressed and Brad and Sue arrived a little after 4:00 PM.  Kelly lived with my brother Brad and wife Sue for a few months when she was looking for work as an Interior Designer about 10 years ago.   They were here in Virginia Beach five years ago for Jon and Kelly's wedding, and it was great to spend the evening with them.

We started with a tour of Goldmanor (Kelly's name for their house and property) and tried to convey the transformation that has happened since they got the property in October.  Brad is an architect (retired) so it was fun to talk about the house and the renovations.

We went inside and continued the conversations while dinner was being made. 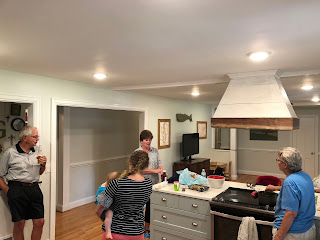 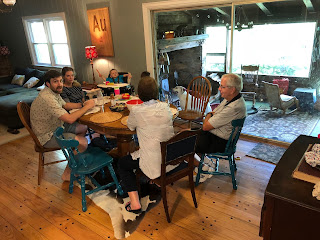 We had broccoli salad, pulled pork (from Jon's two pork butts on the BGE the day before), cole slaw and finished it up with Key Lime pie.  After dinner Pam and I cleaned up the dishes while everyone went out front and enjoyed some more time together.  It was a long day for everyone so we left shortly after and drove back to our campground in Newport News.

Since Brad and Sue are also early risers, we decided to meet for breakfast in East Beach, just off North Shore drive at Sand Piper Cafe.  We had eaten there a few times before.  In fact the morning after the rehearsal dinner for Jon and Kelly, a large group of us had breakfast here. 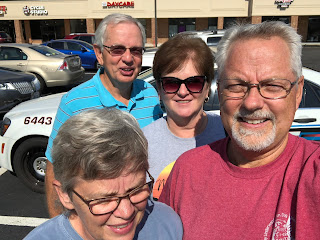 Those selfies in the direct sunlight are tough
It was good to hear a little more of their vacation and road trip, specifically their time at the Biltmore and the Outer Banks.  Sue is due to retire any time, but she hasn't given an indication of when that might be.  She is a high school counselor and it gets real busy for her at different times of the year, especially near graduation.  She is the best at what she does, so her co-workers are dreading the day.

They headed on down the road to the Duke/UNC area to visit those campuses.  She wanted to see Coach K, but reported back that he was not available...

Pam and I went back to the Roadrunner and things started to deteriorate.  We both started feeling puny with the bug that Kelly and Jon were plagued with.  Pam got the worst of it and was up often during the night.  On Saturday we pretty much just rested/slept and got over it.  Pam's lingered a bit but I was much better on Sunday.

I was able to keep a lunch appointment with Kris and Bill Osborne.  The are former full-time RVers that ended up in Williamsburg, VA.  They were on the road for four years and I they follow the Roadrunner Chronicles. 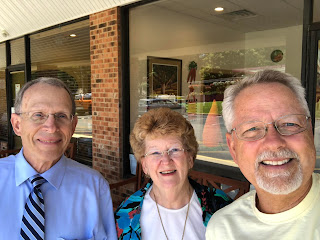 On Sunday,  I (Pam didn't want to take a chance and pass along the bug), sat down with them and got to know each other face-to-face.  That is one of those unique and fun things we get to do as bloggers and RVers - meet people who we've been friends with for some time.  If that makes sense.

It was a great time to get to know them better and hear about this chapter in their life in Williamsburg.  I think they love it here!  Bill is working in aviation again which is his passion.

The next morning, we got up bright and early, hoisted the jacks and were on the road a little before 6:00 AM heading toward Richmond for our 7:30 AM appointment with Cummins.  We arrived 15 minutes early and were met by the Service Manager and lead mechanic promptly at the appointed time.

We discussed the general maintenance they were going to be doing on the generator and explained the fuel issue on the generator.  We then left, got some breakfast and coffee and returned to the customer lounge.

The fuel issue was a fuel line filter (an extra added item by Tiffin).  The normal schedule of maintenance items was completed and everything was running great.  We left before noon and got back to our campground by 1:30 PM. 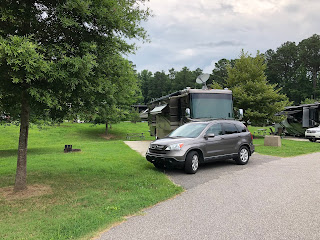 That gave us enough time to head over to Virginia Beach, have dinner with Jon and Kelly and the grandkids.  Jon and I went to a men's cohort meeting and Pam and I spent the night at their place.  Tuesday morning we returned to our campground and took it easy for the rest of the day.

Thats about all for this edition of the Roadrunner Chronicles!  Thanks for joining us!


Posted by Roadrunner Chronicles at 8:54 PM