My First Shot at Pickleball

While we were at the Racoon Creek FamCamp at MacDill AFB, I got my first shot at playing pickle ball.  I've been hearing about it for years and was ready to give it a try. 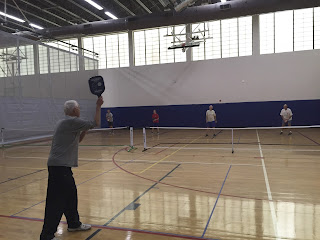 Years ago, Pam and I would play a lot of racket ball together.  But we haven't played in quite a while.  We've got some first hand information from Steve and Karen when we toured their winter place at the Palm Creek RV Resort in Casa Grande AZ a couple of years ago.

It looked like fun and they have a pretty fantastic facility there.  On the more modest end of things, the base gym as a couple of courts lined in one half of the basket ball court.  Jim invited me to join him a couple of times. 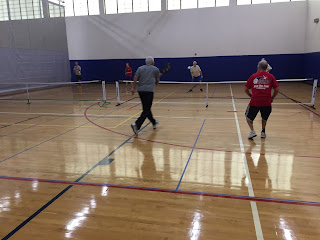 Volunteers from the FamCamp set up the nets and the hour - 90 minute session is made of campers.  So it is a great way to meet other folks in the campground.

It was really a lot of fun.  The plastic ball reminds me of a wiffle ball we used to play with as a kid.  And the paddles remind me of wooden racket ball rackets.  It works out well as the ball doesn't fly around so fast as a racket ball or tennis ball. 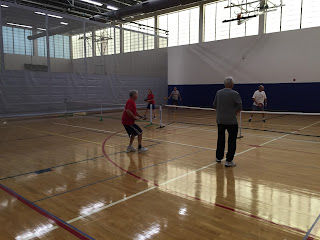 But we still get a little bit of exercise and have fun doing it.

The rules are a bit confusing and the scoring takes some time to get right, but by the second time we played I felt a lot more comfortable with both.

The good news is that these folks (guys and gals both) don't take it too seriously.  They make it easy for a novice/beginner to get the hang of it.  And its all about the exercise, fun and camaraderie.  They were competitive to a point but no one was over the top.  No one was taking this too seriously.

As a complete beginner, I was glad for the help and instruction and casual level of play. 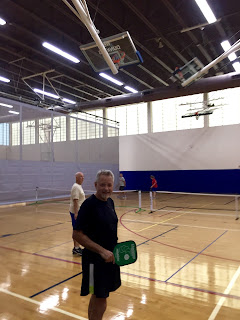 One thing I heard was that the guy who invented the game named it after his dog "Pickles".  Anyone else heard that?

Its a fun game and I look forward to playing more often!

Posted by Roadrunner Chronicles at 4:30 PM