Roadrunner Recap
We spent one of the best June's on record visiting a major portion of Utah.  We started out at Mesa Verde and saw the cliff dwellings, then moved over to Monument Valley and took a jeep tour.

We stopped in Torrey UT to see Capitol Reef National Park before moving on to Arches National Park in Moab UT.  Then we stopped at Fruita, CO to see the Colorado Monument SP.

We ended up the end of the month at the foot of the Rocky Mountain National Park in Loveland CO.

It was probably the most scenic and spectacular month we have spent in our six years on the road.
Here are our stops: 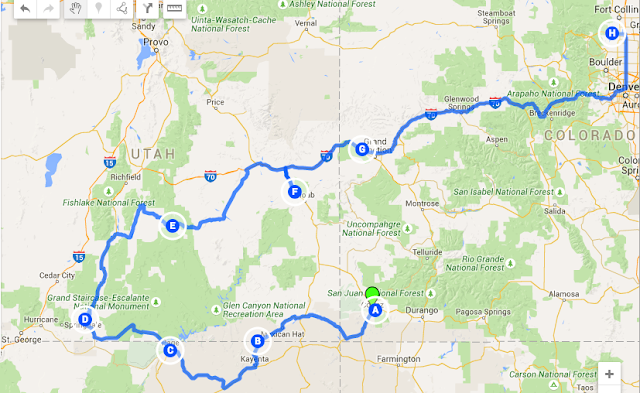 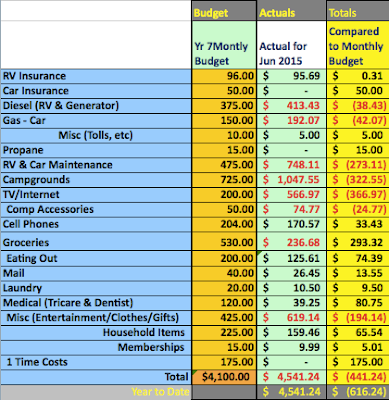 We were only under budget on a few areas and overall we spent a lot on campgrounds and internet.  I called Verizon and adjusted some things but it was quite a shock to be over that much.

Biggest Expenses
During the summer high season in Colorado and Utah we found ourselves paying more than we like at a lot of the campgrounds.  I just have to remember that we will make some of that up in the coming months when we stay at military bases and at free places like Joan and Mike's (Pam's sister) in Tennessee.

We spent 172.13 on shirts and souvenirs while visiting Monument Valley, the Northern Rim and the Arches National Park.

Large One Time Cost Item
The biggest expense for the month was getting new Michelin tires for the Honda.  We called ahead to the Walmart and ordered them so they would be there when we arrived.  It turned out to be $649.61 which was cheaper than what we have paid in the past at Sam's Club for the same brand.

Monthly Average
Not much to average here since it is only the first month of our 7th year on the road.