I always like going to Red Bay.  Red Bay is the home town of Tiffin Motorhomes.  We have found it to be the quickest and easiest place to go to get our motor home (the Roadrunner) serviced.  Since Pam's sister and brother-in-law live in Maynardville, TN we are in this part of the country each year. Getting to Red Bay only takes about 6 hours from there.

We usually don't have to wait a long time to get things done and we learn a lot.  We get a chance to talk with people in the Allegro Campground 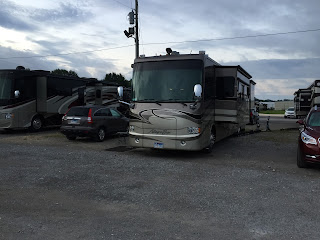 to hear the latest on what's getting fixed we find new things to buy in the Parts Store.  We also take advantage of the Tiffin factory tours and learn lots, no matter how many times we take the tour.

This post summarizes the highlights of what we got fixed this trip.

We left Maynardville and arrived at the Allegro Campground on a Saturday.  We have found the earlier we check-in, the sooner we get on the list to be seen in the 'Express Bay'.  So we were ahead of those that checked in on Saturday afternoon and Sunday.

Our fix-it list in Red Bay looked something like this:
Tiffin
- Heater/air conditioner thermostat (front temps often go to 103 degrees)
- Sink drawer need to be tightened
- Keyless entry:  front door and a bay door sometimes would not lock

Bruce Deaton Custom Paint Shop
- Check the rails for cracks
- If there are no cracks, spray on new Clear Coat (Clear Coat was peeling on top of rails)
- Install a new wind strip / black deflector piece near the hinges on the main front door

Bay Diesel
- Check why engine appears to 'chug' a little going up hills
- Amber light comes on going up hill, then goes off on the down hill.

On Monday morning we checked in with Bruce Deaton to make sure we were on track for our Tuesday appointment.  We were and next we went over to Bay Diesel to schedule a Thursday appointment for the Roadrunner.  Next we took our time and went over to the Tiffin factory and walked through some new models. 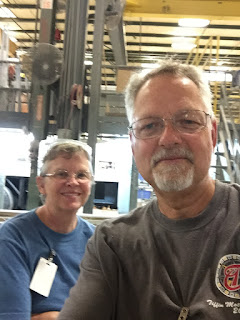 On Tuesday we left the campground and were over at Bruce Deaton's a little before 6:00 AM.  We dropped off the coach and then went over to Jack's for breakfast.  They finished up a little before 11:00 AM.


Then we got a call from the Express Bay and were in by 11:30.  They moved quickly through our list and replaced the front heater/air conditioner sensor in the ceiling in the front of the coach.  It fixed our thermostat problem.

Next, they sanded off the metal contacts inside the door opening near the hinges.  They also sprayed some cleaner on them.  That also worked.  While they were at it, a QC guy came by and check the rails and wet bay.  No problems there.  And they check the floors on the slide out.  Big problem there.
Yikes!

Yup, the DS slideout floor needed to be replaced.  They told us they could get us in the repair bay as soon as the next day or as late as 10 days....It all depended on how many work orders came in before closing time.  None did and we thankfully got in the next morning at 7 AM. 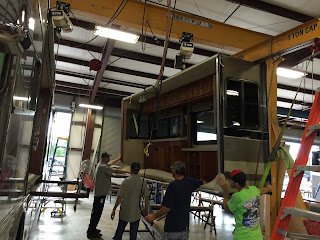 More bad news. They pay for the floor repair for units 6 years old and under.  The Roadrunner is 8 years old.  They wanted to be sure I understood it was going to cost me $950 to repair the floor before they started working on it.

I didn't see a) how it was going to get any better if I didn't get it repaired, b) how I would ever find someone else to do it cheaper or better somewhere else.  So we gave them the go ahead to proceed.
While they were doing that, I was going through my options on how to get them to cover the costs or at least reduce them.  I figured if I saved $100 or $200 it would be worth it.

I started with the techs and asked if there were 'magic words' or some approach I could should use with management.  No ideas there.  Next I talked with the supervisor.  He wasn't very helpful at first
but after I asked if he had any 50% coupons laying around he started to be a little more interested on doing something for us.

After they got the slide out and laying on its side, a number of them were looking over things and then the supervisor walked by en route to talk to his boss say, "I think we may be able to do something..".  False alarm he came back and said he talked with his boss and we had two issues that we probably couldn't overcome:  the fact that our paperwork was stamped "Not Original Owner" and it was over two years out of warranty.

Next I went to go see Wade and talked with him.  It was a short conversation.  Cordial to a degree but when I heard him say, "I am just going by what 'they' told me to do -- the customer pays half and we pay half".  I asked if he didn't have some leeway, or if there wasn't something he could do, or if he could work with us?

He replied with the same thing he said before. I knew I lost him when he got that '1000 mile gaze' through the window for the third time and we sat there in silence.  So I dusted myself off and said 'thank you' and went back to watch them fix the floor.

Some days are tougher than others when you try to negotiate from a position of weakness and zero leverage.

They finished up the floor and put the slide back in and we were out of there before noon.  We went back to our campsite and went over to Bay Diesel the first thing (7:00 AM) Thursday morning.

It took them a while at Bay Diesel to get going on it but moved it into the Service Bay and put the diagnostic gear on the engine and ran some tests.  From that they determined we needed a new lift fuel pump.  They put that in, we took it out for some test drives with the diagnostics hooked up and it did not solve the problem.

We spent the night parked outside of their shop and took another run at it on Friday morning.  They were not successful in finding the issue and ran out of ideas so they called a repair facility in Tupelo, MS (100 miles away) and got an appointment with one of their Cummins engine tech for 7 AM on Saturday morning.

So that's a recap of the repair work we got done and tried to get done on our 7th trip to Red Bay.