Family and Friends Time in Texas

We love to go spend time with family and we got to see Brad and Sue for a few days.  They live in the Fort Worth area and we found a good RV park nearby at Cowtown RV. 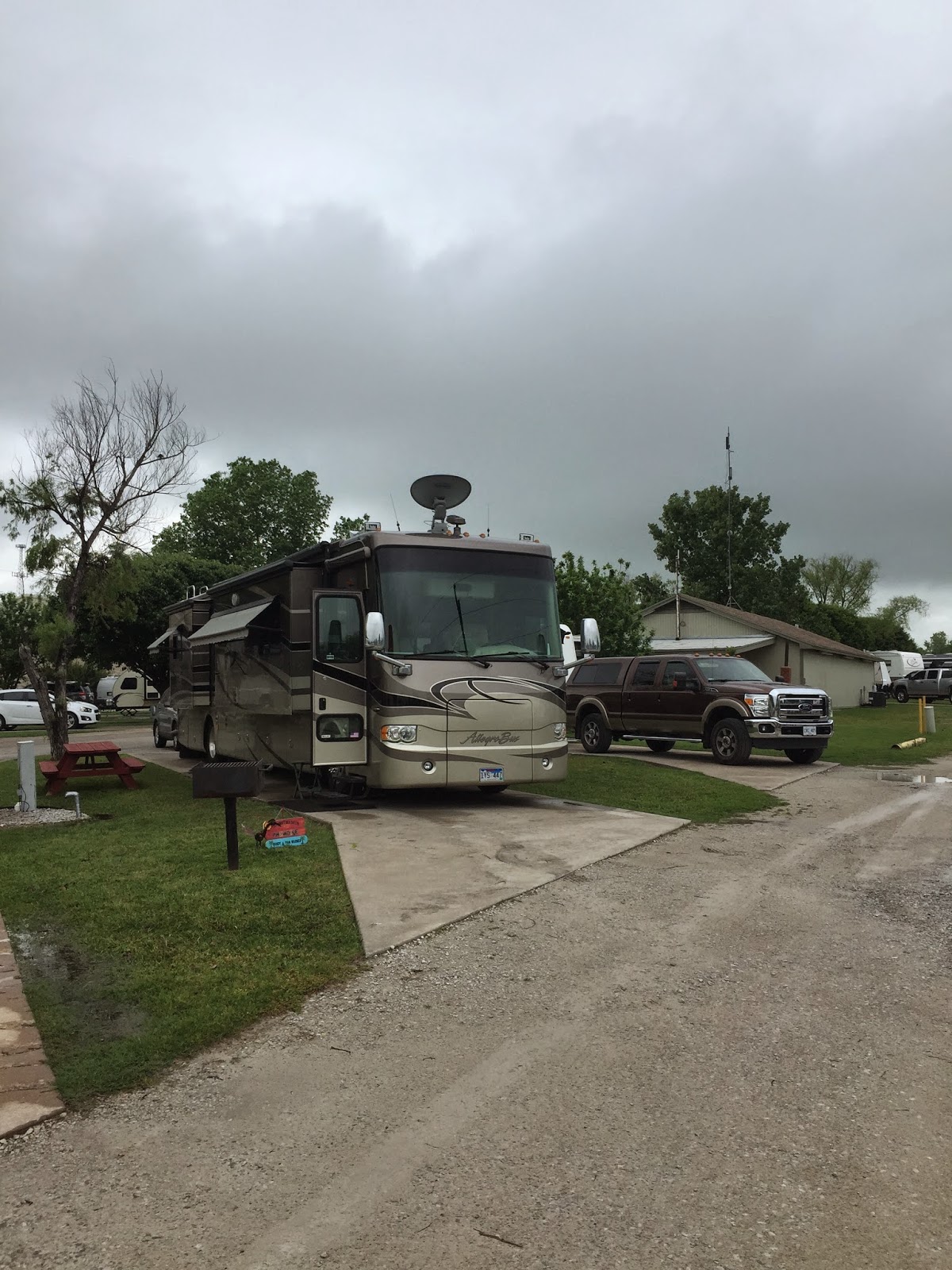 The Winegard TV antenna didn't do too well the first night we were there because of the intense cloud cover.  But it locked on the next morning and we were fine for the rest of our time there.

The first order of business was Texas BBQ!  We went to dinner at Riscky's Barbeque. 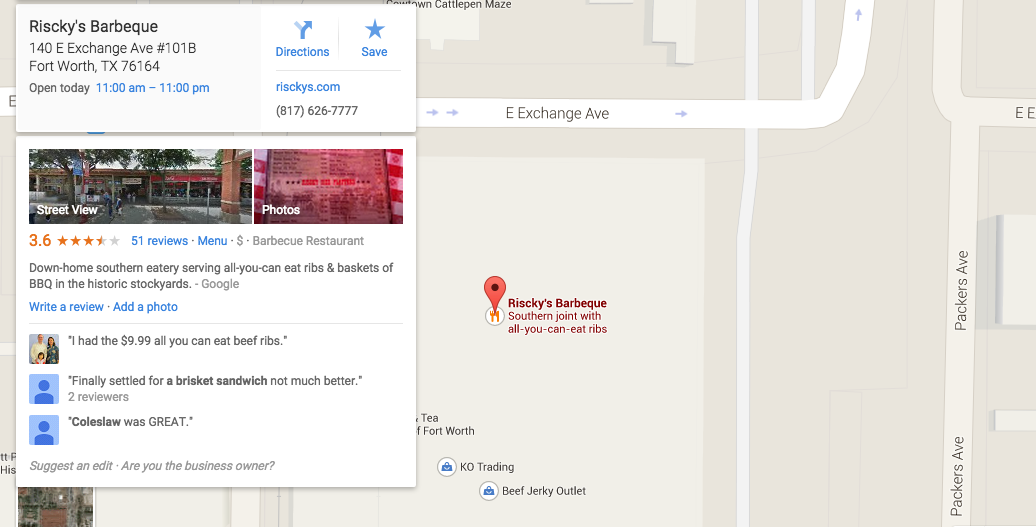 The brisket was terrific.  And the rain came hard and fast while were were having dinner!  Whoa - it got dark and ugly and it started raining hard, then sideways and it came down in sheets.  It was a little scary for a few minutes.  People were moved away from windows, the power went out, then came back on.  After about 10 minutes it was over.  Another gully washer in Fort Worth!

That was exciting and we didn't see any damage.  That was the worst storm the whole time we were there.  Mostly, Brad and I played golf. 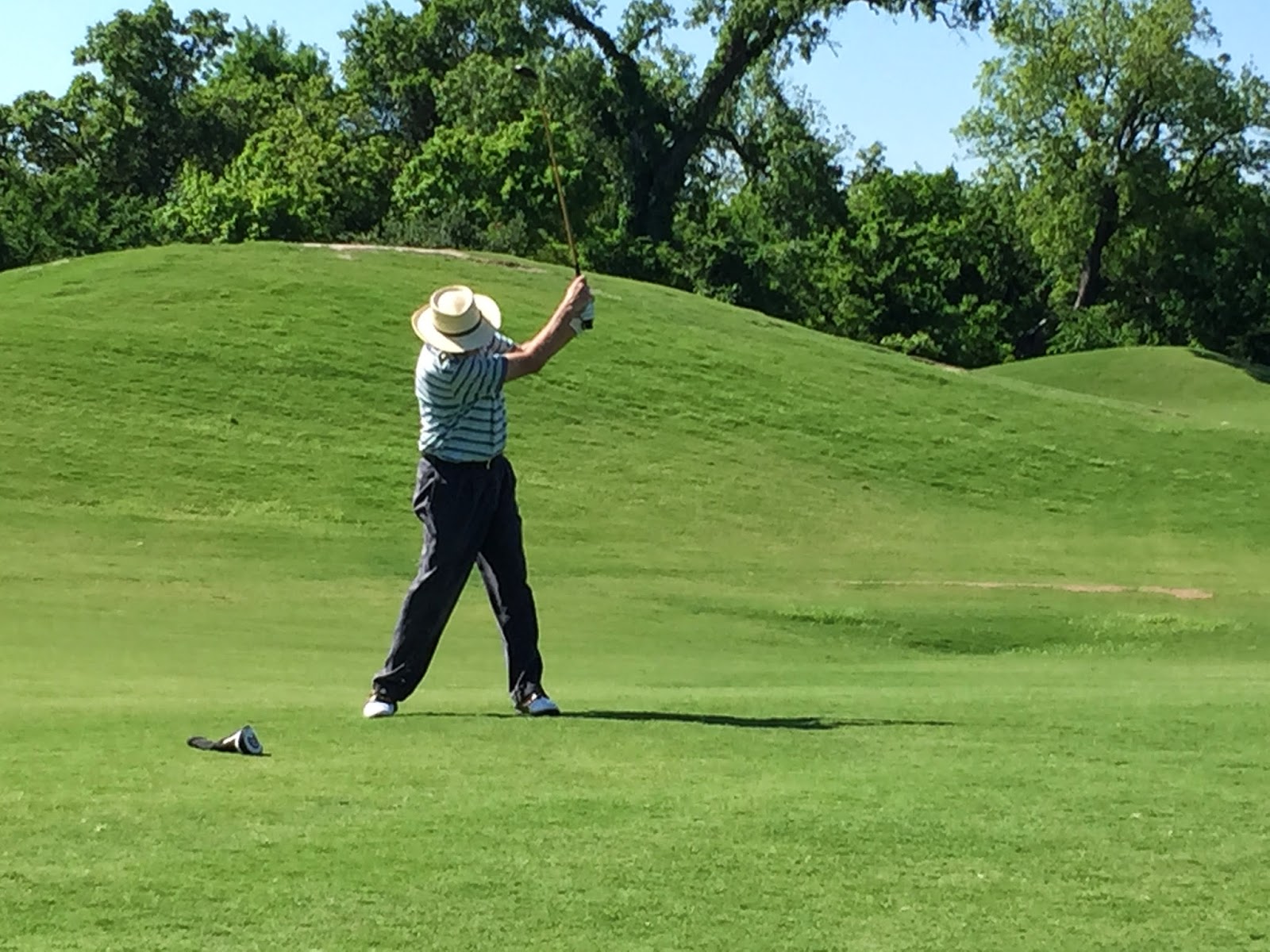 We played at a lot of 'Creeks' - Lost Creek, Hawk's Creek, Squaw Creek and our last day we played at Split Rail with our friend Andy who lives nearby. 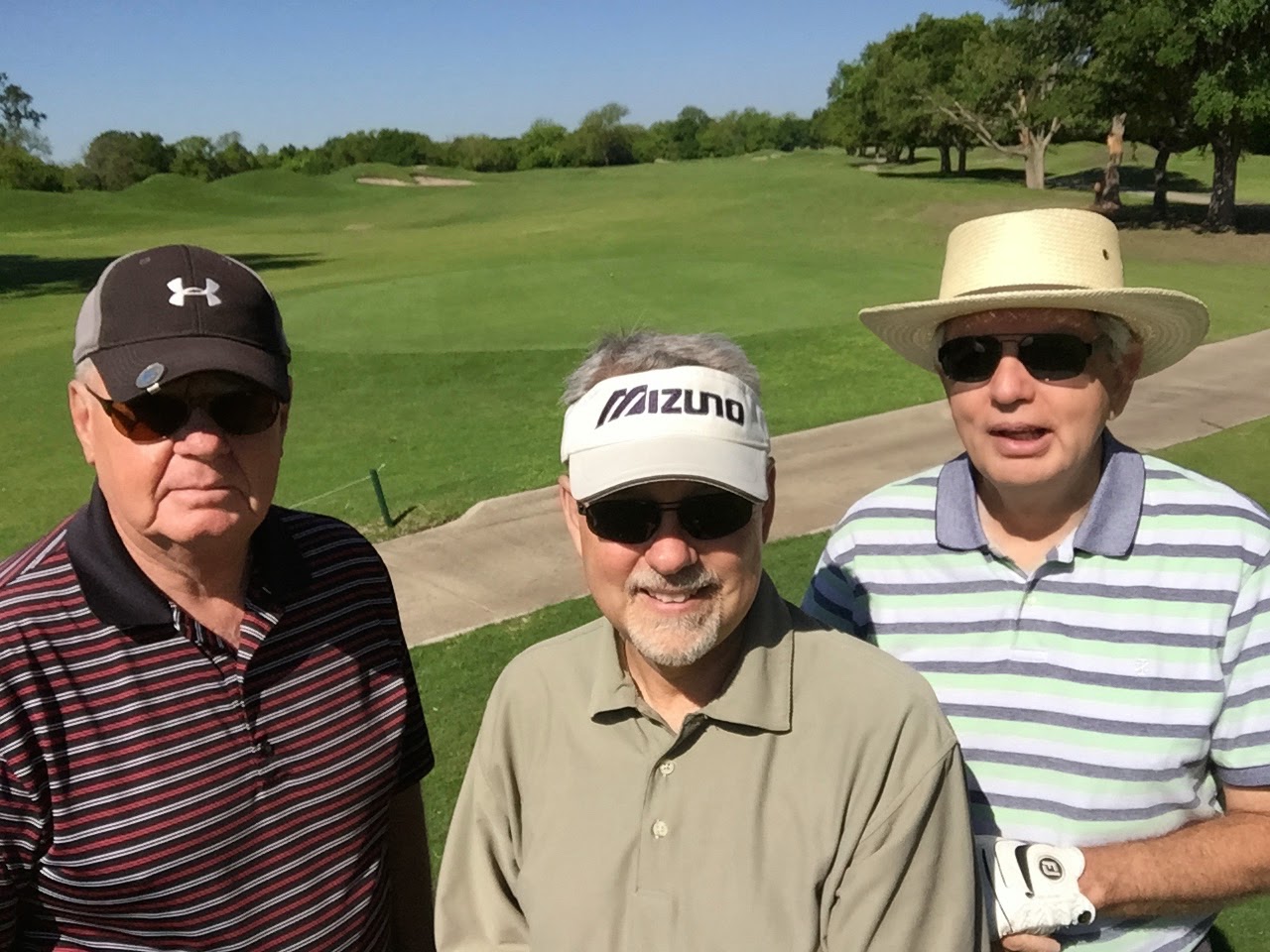 Split Rail was a very nice course and Brad and I got another free round of golf with a cart for filling in our divots.  ??  On hole 8 Brad and I hit shots from the fairway and then used the sand bottle on the cart to fill in our divots.  A guy drove by said 'Thanks for doing that'.  It's part of golf course etiquette. Like repairing ball marks on the green or raking sand traps after your shot -- something our parents taught us when we started playing the game as kids.

The same guy drove out by us again on #10 and handed us a couple of cards with "Free round of golf plus golf cart" on it!  Nice!  Never know what is going to happen when someone catches you doing something right...

Later in the week Pam and I were able to have lunch with Mark and Dortha who are in the area.  We met at In-N-Out burger and got caught up. 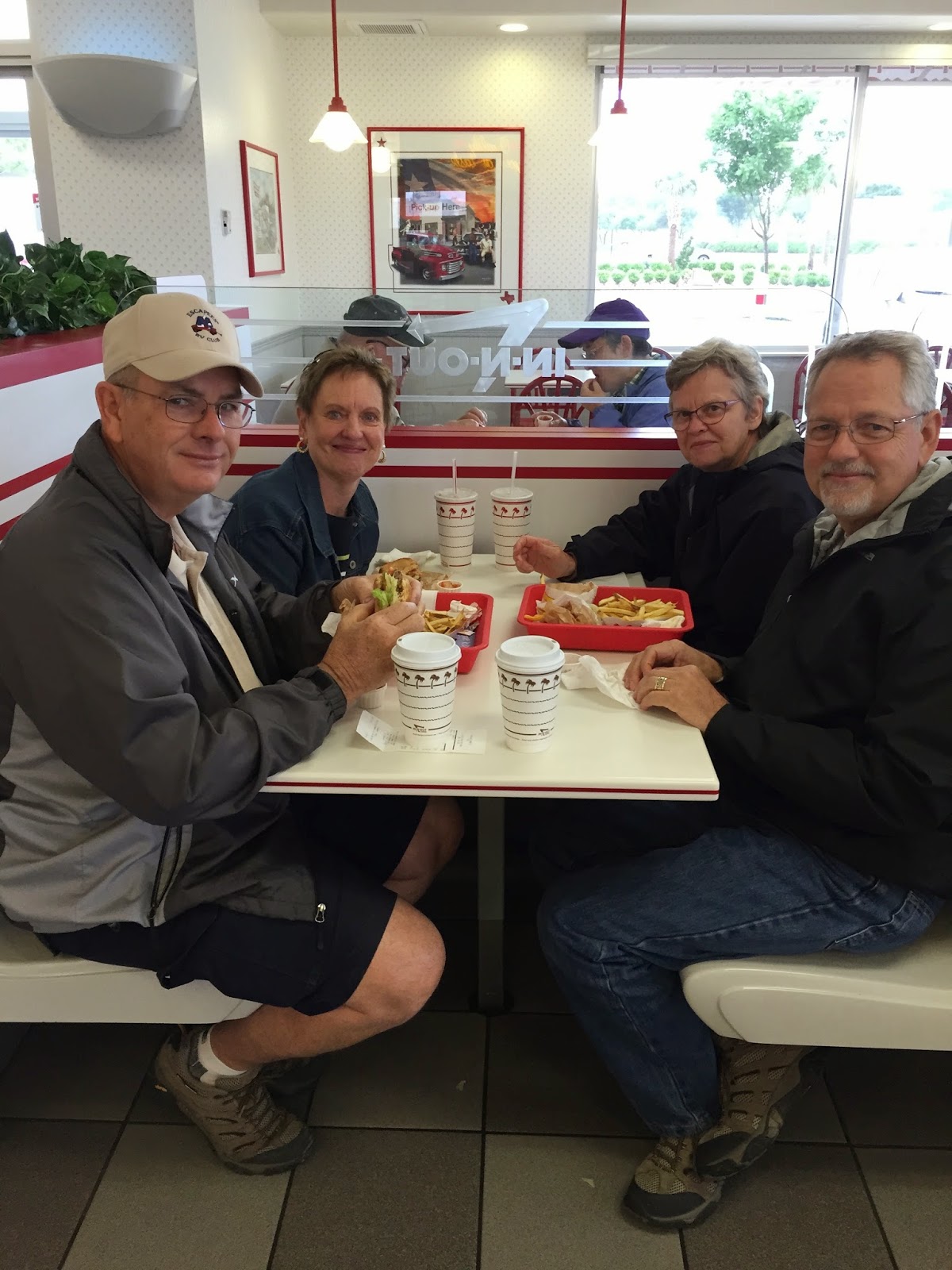 We haven't seen them in a couple of years and it was nice to do so!

Brad and Sue took an 11 day tour through England, Wales and Scotland last summer and we were able to talk them into going through their pictures.  Brad had several hundred of them and after dinner a couple of nights, we spent time seeing the sights along their bus tour and hearing all about it.  We only got through Day 8 so we have to finish seeing the rest next visit.

Our last evening in town, Sue invited Jo and Andy over for dinner.  Jo and Andy are our good friends too. 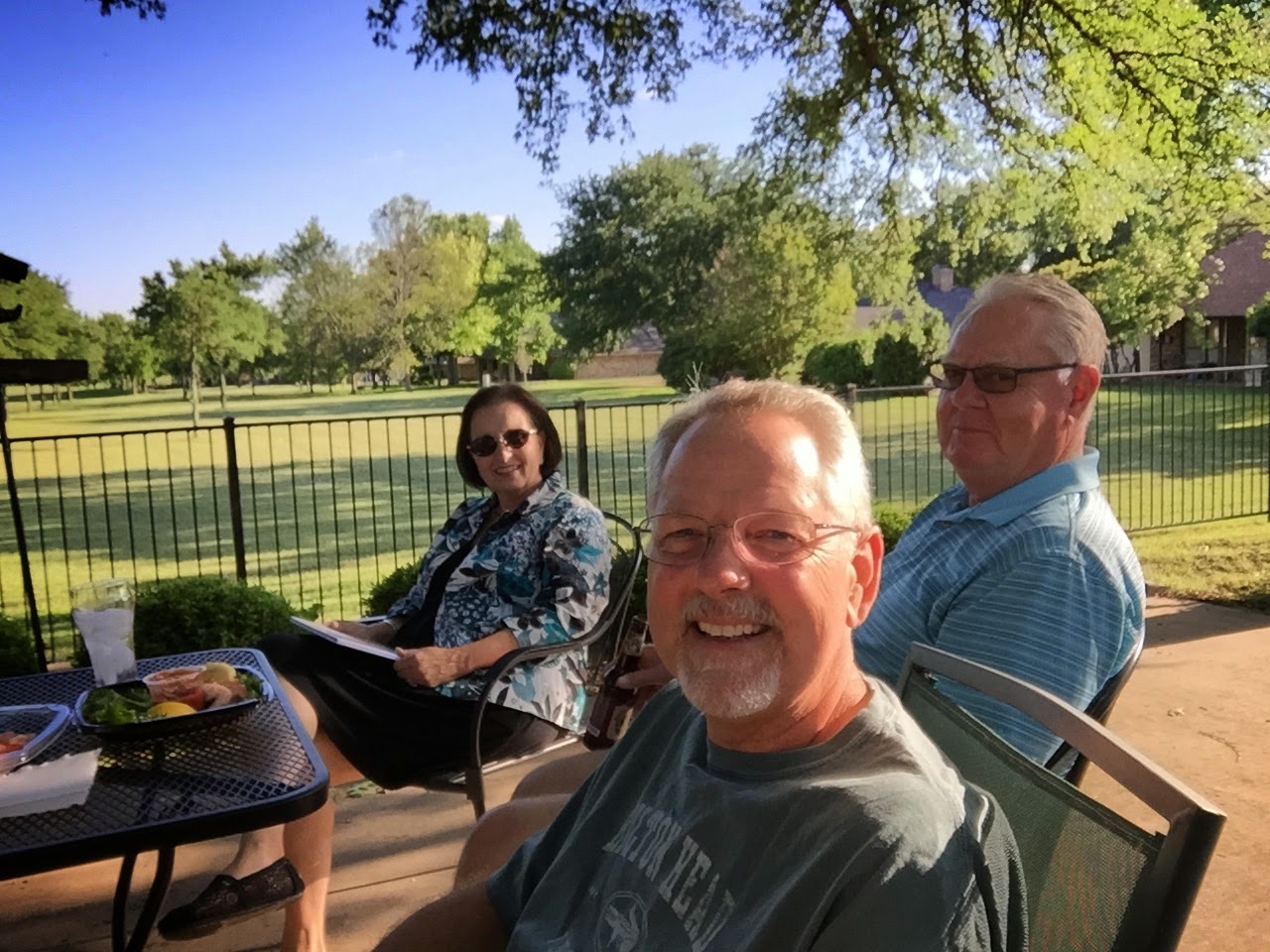 They met Brad and Sue while they were both stationed at Loring AFB, ME in the 1970's.  Following that assignment, Jo and Andy got orders for Norton AFB, (San Bernardino CA) where Pam and I were stationed.  Andy and I both served on the AF IG Team and we got to know them during our tour there 1986-1988.  After the AF, they moved to the Fort Worth area not far from Brad and Sue so we get to see them regularly.

We had a great visit in Fort Worth and look forward to the next time.

Posted by Roadrunner Chronicles at 8:24 AM