Catching Our Breath in Albuquerque

We arrived on Friday and have been enjoying the chance to stay put for a few weeks. 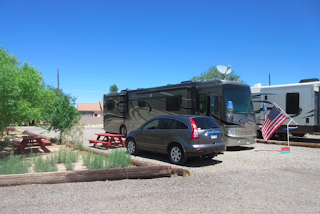 We've been on the road for six weeks now since our 'winter hiatus' in Virginia Beach.  In April we raised the jacks and closed the slides and hit the trail 11 times.

It doesn't seem like a big deal but its been fun and we 'got right back into the saddle'.  We love this! There are a few things we need to do and catch up on, so this break for the next couple of weeks comes at a good time.

We are pretty busy absorbing our experiences with the friends we've seen and absorbing the new sights and places that we have been.  And I have a number of blogs 'in the works' to note it, but instead I wanted check in again.

It seems like we in a perpetual state of change although that in itself is a bit of constancy.  We are still of the mind that we want to see as much of the area as time will allow, but at the same time take care of regular maintenance items, household chores and throw in some fitness/exercise.

While here in Albuquerque, one of the first things we did was take my bike in for an overhaul.  It's been a number of years since it has had some real TLC and we found a good bike shop near Old Town - The Bike Works.

What a find.  I am pretty excited about getting everything checked out and get it running in top form again.  I made a mental note to get some work done on my last ride on the Tammany Trace Bike Trail in Louisiana on the north side of Lake Ponchartrain.  I knew I was in trouble when I had to get off my bike and turn it upside down to change gears...  I picked a good one and had a good ride but obviously there was something wrong.

So I took it in to Rick (Gator) at the Bike Works.  This shop is impressive.  The ladies behind the counter were very helpful and Gator was great.  When I first walked in I got to talking to them and they asked if I knew some good bike trails around town.  Since I didn't they found a Bicycle Map of Albuquerque which they gave me. 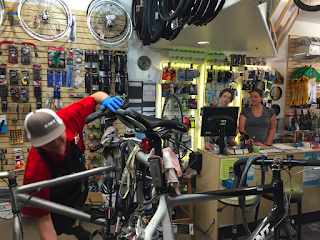 He put my bike on the rack and thoroughly inspected it and I learned a lot.  He was not the typical mechanic who hands you a list of 53 things that are wrong and gives a high $$ quote.  Quite the opposite.  He took his time and checked everything out and gave ample suggestions on no-cost or low cost options.  Definitely not in the up sale category which I love.

My main fixes will be an upgrade to raise the handlebars, new brake cables and brakes that are bent busted and 'blown out', and a general tuneup to tighten up and adjust things.

In addition to getting my bike in the shop, we had a nice hike later than day along the Bosque on the Rio Grande.  Great area of town and a beautiful day to get out.

Since brother Reid and wife Amy live in town, we've been able to seen them a few times and share meals together.  And Saturday we went over to their office and helped install a 6' shade across one of their office windows at Environment Control, Albuquerque. On Sunday they had a big lunch for Amy's mom and her brothers' families in town.  Lot of fun seeing them again.

We have already had breakfast at Frontier Restaurant and have checked out Sunday lunch after church at the Owl Cafe.  We lived here 1988-1992 and never stopped in to the diner.  Glad we did the Owl Cafe has good food and some personality to it.

Yesterday we were getting caught up on things.  Pam went for a nice walk around Hardin Park on Kirtland AFB about 1/2 mile from our campground.  It may be one of the best parks we have seen and perfect for walkers, joggers and families.  It gets used all day long.

Next we did some more planning and scheming for the middle part of our summer in Colorado after we see Utah.  We also spoke with some friends last night who had just recently taken a tour of Monument Valley, Grand Canyon, Yosemite, Bryce Canyon etc and we got even more excite about our plans to see those places in June.

While she was doing that, I got started on my online work.  That kept me occupied all day.  Pam also did a couple loads of wash and went to the grocery store.  Nothing too exciting - just regular stuff.

We enjoyed some fish on the grill and I put everything away when it started blowing again.  It has been quite windy here which is no surprise.  A couple of years ago I put some folding chairs and the chair covers under the Roadrunner.  Then the wind started and I never found one of the bags for the folding chairs...

Last night the wind continued and we woke up every couple of hours rocking and rolling with that flaps over the slide outs whipping a bit.   Almost closed the slides but didn't want to wake Pam up.  Worked out OK.

We are meeting up with friends Ron and Marta for lunch.  Since we haven't yet overdosed on New Mexican food, we are meeting at Sadie's which should be good.

That's all for now - thanks for joining us on the Roadrunner Chronicles!

Posted by Roadrunner Chronicles at 11:51 AM