We have been in Key West for two weeks now and are staying at the Campground at Sigsbee Naval Station near mile marker three.  The 'campground' is really four areas where campers can stay.

One area is at Trumbo Point that is closer to downtown but has no hookups.  It has a dump station and water.  The other three areas are on Sigsbee and are affectionately known as 'The Rock Pile', 'Hollywood' and 'The Circle'.  All three have full hook ups which means 50 amp electric, sewer and water.  There are full hook up 89 sites.

When we arrived, there was no waiting list so we were able to move right into full hookups.  All sites are assigned and we got #12 on 'The Rockpile'.  It was back on the third row from the water, a bit cramped but adequate, for $23/night. 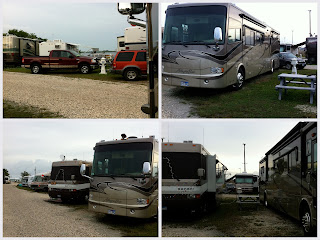 The day before our 14th day at #12, we got a notice stapled to our door handle that we were to move to site #430 over near the Circle and on the water. 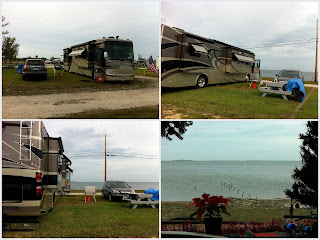 Much better!  We are dry camping, but don't mind at all.  For $13/night it has a view that is hard to beat.  We will be here for about 8-10 days and then cycle back into full hookups.

After we got all set up, I went for a bike ride.  I love it here in Key West because I can ride my bike, get some exercise and see some interesting sights. 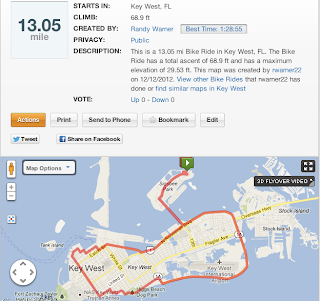 I have an account on MapMyRides.com which has an iPhone app.  I record my rides and it creates a map of where I have been.

After that, we decided to set up our generator exhaust pipe for when we run the generator.  We bought a Camco Gen-Turi a while back with just this kind of situation in mind.

It wasn't too hard to figure out and after a while we had it installed. 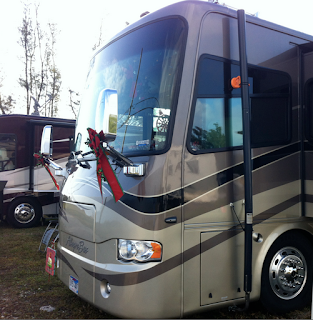 It works like a champ and we no longer have to close windows when we have the generator running.  Plus, if we have neighbors close by, they will appreciate it too.

The rest of the day we hung around the campsite and talked with neighbors a while.  During the day Marg and George took the campsite next to us and that was a pleasant surprise.  We were parked next to them last year a few spots over.

Things have changed a little for them.  They took their Allegro Bus to Alaska during the summer and them drove back to LazyDays in Tampa to buy a new Winnebago Tour 43'.  Nice wheels.

After some barbecue chicken on the grill and a little TV, we called it a day.