This is the first of what may be 7 posts on our family (Warner brothers and our wives) reunion.

Our folks were married here in Spokane in 1942.  I am blessed with three older brothers. We had no sisters.  Dad always wanted a little girl and when they tried a third time for one they got twin boys.  Me and my brother Reid.  Marty is the eldest and Brad was next.

Our parents are no longer with us and we have a lot of questions about our heritage and ancestry.   Reid's home office of Environment Control is in Coeur d'Alene, Idaho about 45 miles from Spokane.  When he was here in 2002, he started looking around the area and retracing some places where our mom lived and worked after she graduated from Kennewick High School.

Mom and Dad met here in Spokane (in 1940?) while she was working at the State Street Theater and going to Morse School of Beauty and Culture.  And Dad was stationed at nearby Fort George Wright.

So we have planned on a trip together to the area and it began yesterday.  Reid and Amy flew in on Southwest Airlines from Albuquerque. 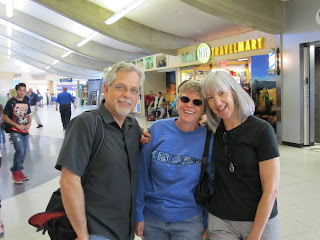 Marty and Elena flew in from Walnut Creek, California.  And Brad and Sue drove from Fort Worth, TX with the most recent stop in West Yellowstone, Wyoming. 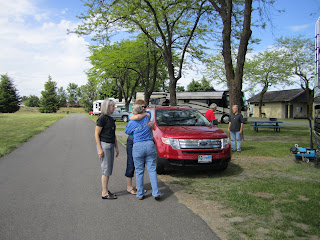 We got everyone checked in to the Fairchild Inn here on base. 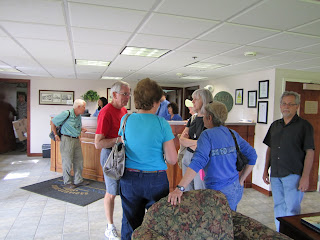 Then we went back over to the coach and enjoyed the nice day. 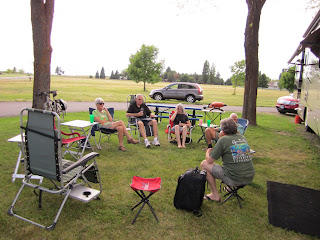 Reid and Amy have been the impetus behind this event and did a lot of prior planning and preparation for it. 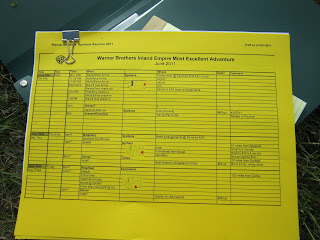 Reid laid out a schedule of the next seven days and we went through it.  He prepared a package for each couple with memorabilia and notes related to where mom and her relatives lived in the 1850's in eastern Washington.
The plan for the first couple of days is to start out at the Spokane County Courthouse where our parents got their marriage license, drive over to Garfield where mom's grandfather Asa Overby homesteaded 240 acres of land, then look through some records at the courthouse in Colfax before we spend the night there. 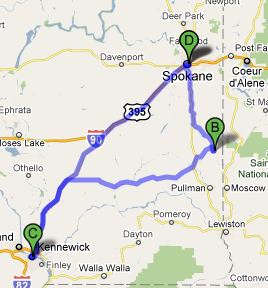 On Friday, we plan to look around Kennewick where our mother grew up and graduated second in her high school class of 1938.
After reviewing the plan and the information, we went over to the Airmen's Mess Hall for dinner.
But before we got there, Elena and Marty surprised us with T-Shirts.  By then I figured we were  official. 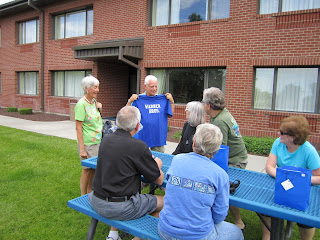 Aren't t-shirts part of reunions?  I am sure we'll see more of them later.
On to the chow hall and a good dinner for a great price. 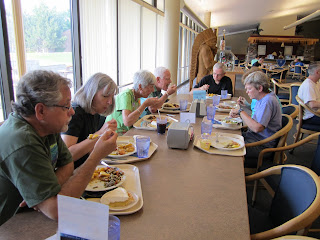 After dinner we returned to the Roadrunner and enjoyed the evening. The girls talked inside the coach while we played a few games of ladder ball.  It was fun and we were not too concerned about the score. 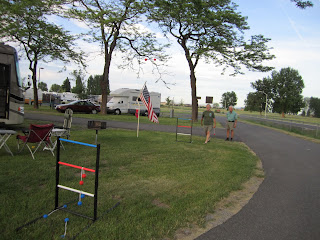 We traded team a few times and I think Brad came out the big winner. 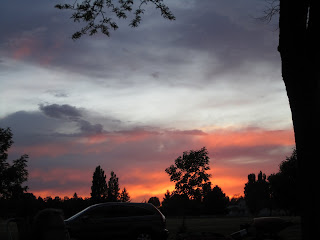 We watched the sun go down and pretty much called it a day after that.  We are looking forward to the rest of our time together and learning lots about our family history.
Thanks for joining us on the Roadrunner Chronicles.  Stay tuned for more on the Warner Bros. Reunion of 2011.  Until next time...
Posted by Roadrunner Chronicles at 1:18 AM