Big Weekend with the Boys

We get to babysit often and we love to be able to do that.  While Kelly and Jon were gone for the weekend we had the boys (Brooks and Harrison). 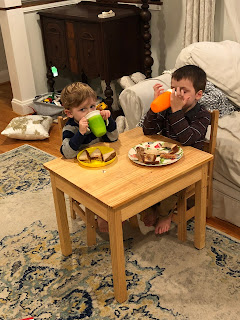 We spent some time at their house but the big deal was that they spent their first two nights with us at our house.  We let them know back in April when we first got out place that the extra bedroom with two twin beds was “their room.”

We weren’t sure how it would actually go because: 1) they were not in their own beds, and 2) they usually don’t sleep in the same bedroom.  We went through the ‘normal’ routine after dinner with play time, reading books and then getting baths.  Harry, being 2 years younger, goes to be 30 minutes before Brooks.

Usually he goes right to sleep but when it was time for Brooks to go to bed, Harry was still talking to himself and tossing and turning.  We had to turn on the light when Brooks went down so that didn’t help things.  Then they finally both were settled down.  I could hear them talking a little from the other room but I expected some of that.

About 20 minutes after Brooks went down, they sheepishly presented themselves into the hallway and announced they had to ‘go to the bathroom’. Hmmm.  One begins to wonder if this is the first of many ‘up and downs’....  They did their business, got a drink of water again and went back to bed.

Another 20 minutes, I checked on them and Harry was still talking to himself a little and Brooks was out.  Harry followed shortly after that!  Yay!  We all got a good night’s sleep.  Brooks was up earlier than usual the next morning but we went with the flow.  It turned out fine.

We pulled out all the stops with Donut Day, Chick-Fil-A playtime and lunch and then we went to their house (12 minutes from our house) for naps.  We followed by going back over to grandma and grandpa’s house for the rest of the day and night.  We prepped them for the idea of going to our church the next morning.

On Sunday we arrived on time and both were in the same class which helped.  Ms Karen met them and they had a great time.  Unbeknownst to us; the 8 member children’s choir was scheduled to sing “Jesus Loves Me” at the morning service.

We pushed the envelope and decided to stay for that and let the boys participate and it turned out great.

I got permission to share this with you.  After several attempts at different school and such, we hoped for a good video of the kids at their best.  This is it.  Brooks was going for it! And little Harry was trying to keep up with the hand motions the older kids learned that morning.

It was fun and a milestone weekend.  Kelly and Jon returned on Monday and things got back to normal quickly.

Meanwhile, Pam had some appointments in the last couple of days and we are ready for her breast cancer surgery on Monday Nov 18 at 10:30 AM.  We are very thankful it is Stage 1, it is small and it was caught early.  We are expecting great things.  Thanks for your prayers and interest.

Thanks for joining us on the Roadrunner(less) Chronicles!
Posted by Roadrunner Chronicles at 2:14 PM