We left our home in Norfolk VA mid-day on Saturday for Fairfax VA to see Adam and Melissa.  We we planned an overnight stay before heading to Williamsville, NY.  We changed it up a bit and drove to Fairfax by way of the Eastern Shore through Annapolis MD. 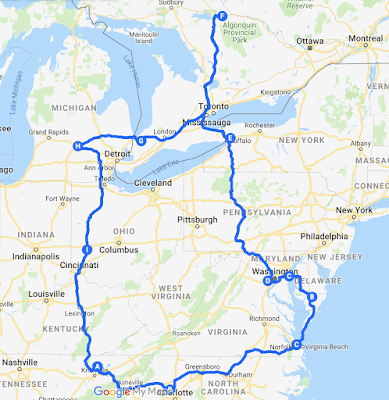 Since we hadn't seen the Maryland State Capital, we drove there for a quick visit in the middle of the afternoon.  We parked downtown near the Vistor's Center in the public garage and walked the two blocks to the capitol.

The Maryland State House sits atop the what seems like the highest point in the city. 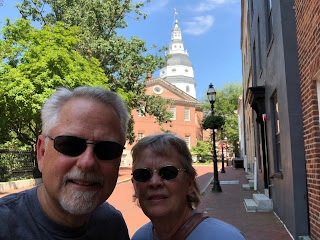 The capitol is small by some standards but is rich in history.  It is the oldest State House in continuous use in the U.S.  That note is quite amazing to us since it goes back to 1772. 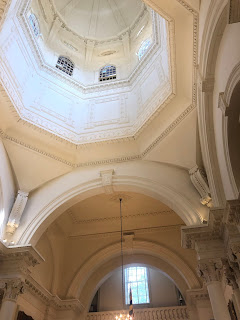 It has a beautiful dome that is unique as it is made completely of wood with no nails.

The current State House is the third to be located on the site.  The first one burned in 1704, the second was completed in 1709 but was not adequate for the growing colony.  The current structure was started in 1772 and completed in 1779.

The State House has the distinction of being the only State Capitol to serve as the nation's capitol from November 26, 1783 - August 13, 1784. 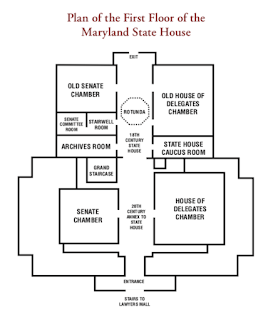 I took the diagram from self-guided tour brochure that gives a layout of the the old portion of the State House at the top and the annex which was joined to the existing building during the 1902-1906 construction period. The building included spaces for both the bicameral body with 47 members in the Senate and 141 representatives in the House of Delegates.  We took a self-guided walking tour and viewed the old House Chambers which was set up as a replica of how it appeared in 1876 - 1905. 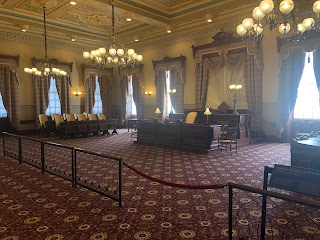 Something I don't remember seeing is a walking area that was an additional thickness of the existing carpet pattern where viewers walked.  I don't know why that caught my eye.

Next we saw a collection of silverware from the USS Maryland housed in the next room on the same side. 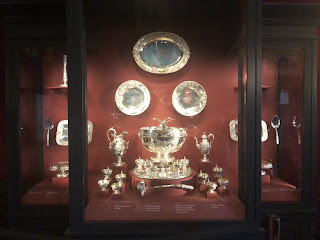 The silver service was created in 1906 and depicts 167 scenes from Marlyland's 23 counties and Baltimore city.

Across the hall is the Old Senate Chamber's where General George Washington resigned his commission as Commander-in-Chief of the Continental Army on December 23, 1783. 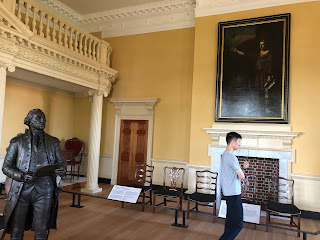 A painting as well as a statute captures the event in the Old Senate Chambers. 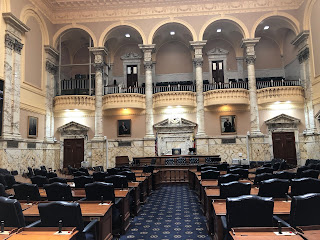 The State House is also the place where the Treaty of Paris was ratified, ending the Revolutionary War. 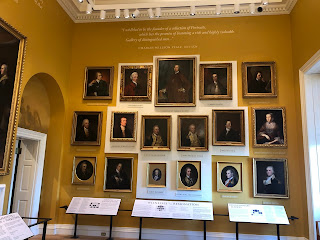 The walls are filled with paintings of key figures in Maryland's history including Washington, Lafayette and Tilghman at Yorktown, and John Hansen who was a delegate to the Continental Congress and at one time served as President of the Continental Congress.  I've never heard of him.  But that's one reason we go to these places -- to learn. 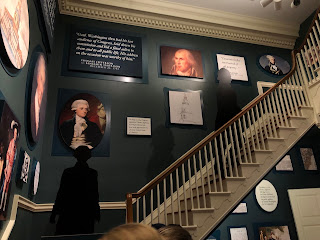 Displays includes paintings showing George Washington's travels through the Revolutionary War, the four Maryland signers of the Declaration of Independence and the signing of the Treaty of Paris.

We spent about an hour at the State House trying to absorb as much as we could and then continued our drive to Fairfax to see Adam and Melissa and spend the night with them.