Our Time in Red Bay


We arrived in Red Bay on Monday, Labor Day.  If we had been planning a little better we could have gone to the Coon Dog Cemetery Annual Celebration like we did last year.  That was a hoot.  But we we glad to arrive safely.

We left a nice overnight stop in Forrest City Arkansas.  While packing up, our Driver Side (DS) slide did not want to retract.  I got a couple of neighbors to help me push it in while Pam pressed the 'In' button.

We pulled out and I thought better about it and we stopped in the big parking lot nearby and we cut up a piece of 2" x 6" that I had and used it for blocking.  That prevented the slide from moving out as we drove down the road.  Not sure we needed it, but we felt better with the preventive safety steps.

Once in town, we found the spot we had reserved was occupied so we went over to Downtown RV Park and called Vickie.  She indicated or favorite site #3 was open for a couple of nights and we took it.  We had learned earlier friends Bob and Marty were at the park and we ended up right beside them as we had done last year about this time.  Turned out great.

Our satellite dish worked fine and we enjoyed some U.S. Open tennis.  The matches this year on prime time have been really good. 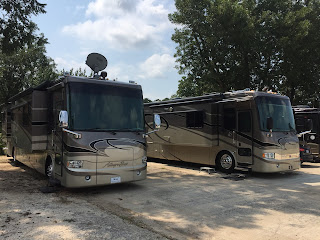 We enjoyed happy hour together and were missing some friends from last year who were here - Steve and Karen and Dave and Nancy. 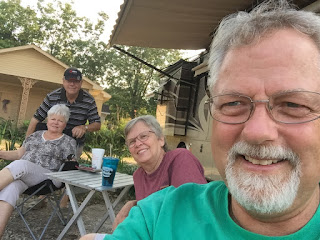 We got up early on Tuesday morning and had the Roadrunner over at Bruce Deaton's shortly after 6:00 AM to get our window replaced.  Next, we drove over to Mississippi and had breakfast at Sparks Restaurant.  It's a local hangout and has good food.

That done, we went by Deaton's and the Roadrunner was finished.  That was quick!  I am guessing it may have taken then less than 30 minutes to change out the window. 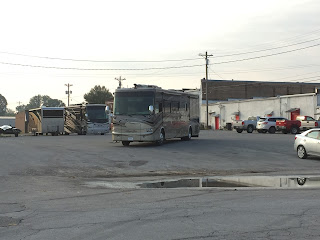 The old one was discarded waiting for someone to carry it off to disposal. 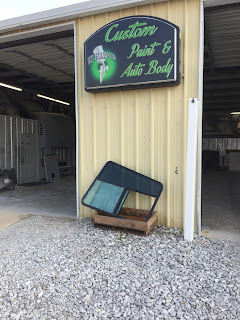 We are quite pleased to have that checked off the list. 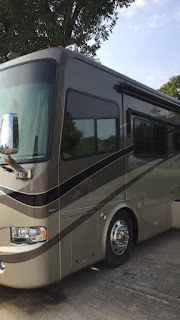 Tiffin customers waiting for service can be at one of the five or six campgrounds in Red Bay.  Part of the check-in process is to have Jason or Norris come to your campsite, verify the work you are needing.  You are either scheduled to be seen by Tiffin RV maintenance folks in one of two vans who come to do the work at your site; or you will be called by the Express Bay where your work will be done by two technicians is a three hour window.

While we waited to be seen by Jason or Norris, we had time to replace the water heater anode rod.  That is a fairly simple process and needs to be done about every 12 months. 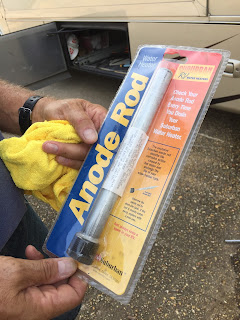 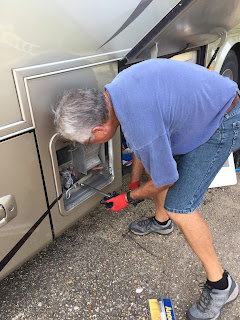 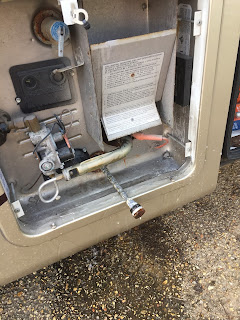 Once the old one is out, it is best to flush the area out with a pointed spray tool.  The residue washed out and I gently twisted the new anode rod into place. 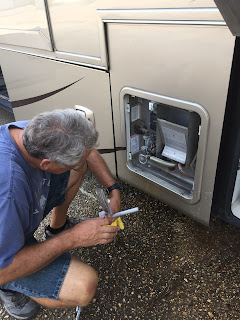 It was good to get another one checked off the list.

We were up at 5:30 AM and rolled out shortly after 6:00 AM.  Early yesterday morning we drove from Red Bay to Simmons Tire near Tuscumbia AL.  It is about 35 miles away and we wanted to be there when they opened at 7:00 AM.

We bought our Michelin tires through the FMCA Advantage program and saved some money there which was nice.  Got our paperwork all squared away, left the keys and then found a Cracker Barrel for breakfast in Florence a few miles away.  Some nice friends gave us a gift card and this was the perfect time to use it.

After a leisurely breakfast, we made a stop at Aldi and then also one at Publix (home of that incredible Key Lime pie). 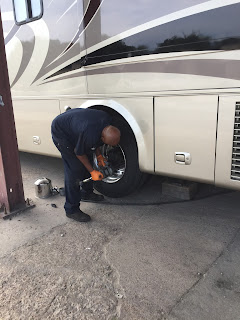 We went back to the tire store and they were finishing up.  We got out of there by 10:30 and made it back to Red Bay by noon.

We wanted to stay at Downtown RV Park but the only space available was #2.  Our Winegard Trav'ler was not locking on.  The large tree was in the way.  So we packed up and moved over to Deaton's RV park and set up and it all worked.

I ran out to Brannon's for a couple of parts and on the way back I got a red light on the dash indicating the Electrical System was not charging.  Uh oh.

We thought about what to do and talked with Deaton's and they suggested Red Bay Body Shop.  Really?  I did not know they had a garage.  Sure enough.  They jumped on it 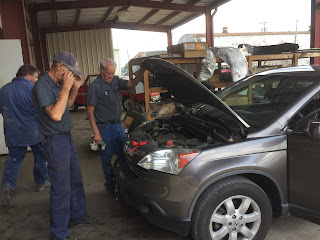 and in 10 minutes I was told I needed a new alternator.  Yikes!  What are the chances I could get one for a 2009 Honda CRV any time soon?

Chances turned out to be good in fact!

They ordered a part and said it would be there at 9:00 AM on Thursday.  I went over this morning at 8:30 and it was already there.  I left the car and William worked on it for a couple of hours.  It was a beast to remove.  We were in no rush so we told him not to hurry and we'd pick it up before they closed.

Meanwhile, shortly before 11:30 we were notified to report to Bay #10 for our Express Bay Service call.  We were told by the mobile maintenance the slide gears were slipping and we'd probably need a new motor. 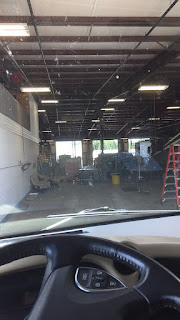 After the lunch hour was over (which currently is 11:20-12:00 for the workers) we pulled into the bay and met Charles and Mo.  They checked out the slide and determined a pin was missing causing the gears to turn and not engage.  We wandered off while they worked on it. 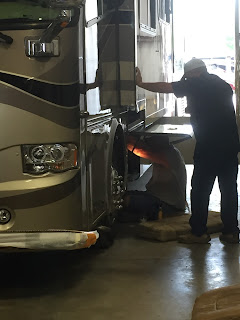 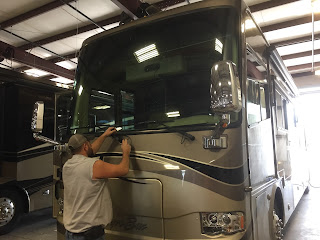 When we returned 20 minutes later the slide was fixed.  They checked the wipers as a recall item and replaced those.  Total bill:  $48.97!  I couldn't believe it.  What a surprise! That was a welcome result.

We drove the Roadrunner back over to our spot at Deaton's campground and then I walked over and picked up the car.  William did a fantastic job.  24 hours after being 'out of airspeed and ideas' -- we had a fixed car!  Not only that, William and used Purple Power degreaser on the whole engine and it looked like a new car under the hood.

So that means we're done this time in Red Bay.  We got to see some friends who work in different places around town.

And we also had the good fortune to meet up with Linda/Bill, Bob/Marty and Carlene. 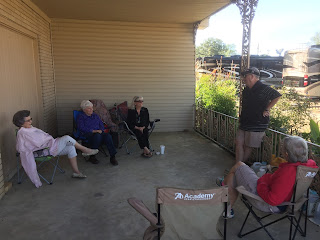 We walked over for happy hour at the Downtown RV Park and spent a little time with them before we said our goodbye's.

Its been a quick four days, but we got everything done and time to move on down the road.

Posted by Roadrunner Chronicles at 8:59 PM