Our Flag and Thank You Veteran's!

I know it isn't officially flag day, but every day is flag day for me... And Veterans Day seems like a good day for a post about the flag we fly outside our RV.

I have always been an enthusiastic supporter of showing our flag.  I don't know why that is ~ maybe because my dad would put the flag out on special occasions when I was growing up.  I have been 'patriotic' ever since I can remember.  My dad spent a career in the Army Air Corps/US Air Force so I was always around flags and ceremony and have great respect and love for our Country.

And I know many of you have served or are serving.  I think it is a wonderful thing to support our military.  And I think it is due in a large part to George H.W. Bush.  He made it a priority to have parades and publicly thank our returning military members returning from Gulf War I.  Before that happened, I don't remember it being 'in fashion' to thank the military.  Now everybody does it.

I have always loved our flag.  I remember getting choked up at baseball games at college and high school baseball games in the 1970's. When we would rise to hear our national anthem being played to start things off, I remember saying to myself, "This is the best part of being here ~ being able to hear the national anthem being played".  Other than that ...I can't explain it.

Pam remembers getting the flag duty in grade school the day President Kennedy died.  She and some friends then had to go back out in the middle of the day and lower it to half staff.

When we moved to Virginia and bought our house in 1995, I bought a flag and decided to hang it out every day.  We had the All-American dream:  2.0 kids, a house with a two car garage, white picket fence, dog --- and a flag flying every day.

When we started full-timing in May 2009, we saw people who had flags flying outside their RVs.  Our favorite was Frank's.  We talked and he gave us some instructions and a build list to make our own.  Thank you Frank Cason.  He gave us some great plans which we modified a bit.

We had the plans for a few months before Pam finally took them and built our flag pole that we use almost daily.  And Kelly made the plans and diagrams that hopefully you will find helpful if you want to make one like this. 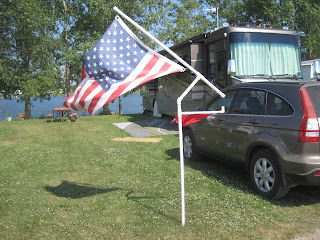 So here are the plans Kelly created from our notes/modifications and Frank's original drawings: 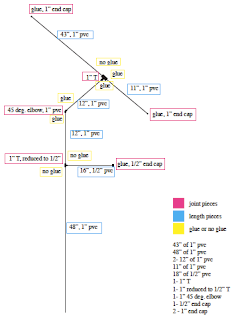 The pole(s) come apart for easy storage.  And there are a few other things. 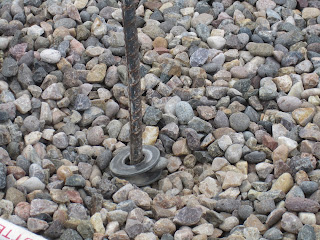 I picked up a 2' piece of rebar (from Lowe's) that I pound into the ground.  Then I put two 1" washers over the top of the rebar that slides down to the ground.  This helps the PVC pole swivel. 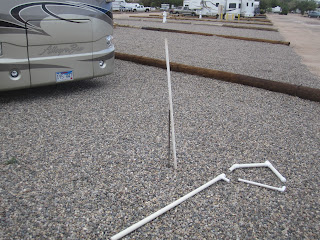 Then I slide the assembled pole over the rebar.  As you can see here, I have an extra 3' of 1/2 " PVC leaning against the rebar.  That goes over the rebar (for a little strength) and inside the 1" pole.
Note: The build list does not include the 1/2" pipe 3' long, 3' of rebar, washers, and eye screws.  You will also need a very small carbiner hook to fasten the flag to the eyelet screw.
The whole thing assembled looks like this: 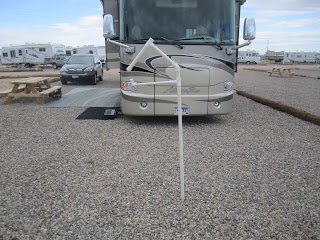 Then the flags - the large US flag and smaller state flags and Canada flags: 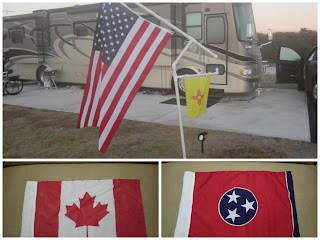 The small flags needed a 'sleeve' that Pam sewed along the edge so that we can hang it sideways.  We pull out the bottom bar, slide it through the sleeve of the flag, and replace it into the T-joint.
If you can not enlarge the picture above or would like me to send you the .pdf file, let me know:
rwarner22@gmail.com 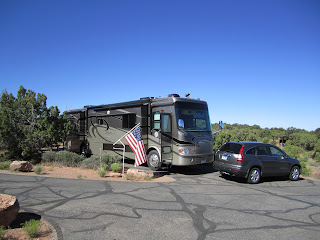