A Shed for Kelly

We love to do projects for friends and family. So when Kelly mentioned she'd like a shed for her bicycle and lawn mower we jumped at the chance to build one for her.  We looked around at Home Depot and Lowe's for ideas and decided most were too big and expensive and that we'd be better off to design and build our own shed.

We decided to make it 4' x 8' x 4 to keep it simple.  We borrowed a truck and picked up materials on Sunday afternoon and got all ready to begin on Monday morning. 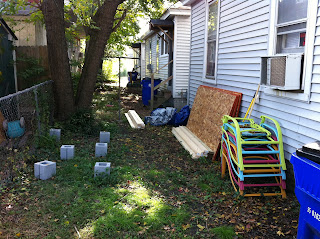 We decided where to put it behind her house and set out the cinder blocks on which the floor would sit.  Surprisingly, it took a little bit of doing to dig out the holes for the blocks and make them level.  But after a while, I got that done.

Next, I 'framed out' a floor while Pam started painting the OSB boards that were going to be the floor and the side walls. 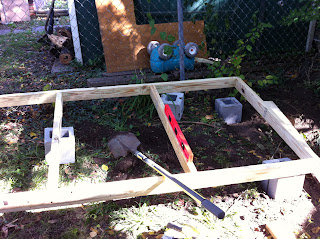 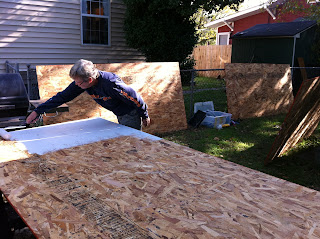 Next the walls need to be framed. 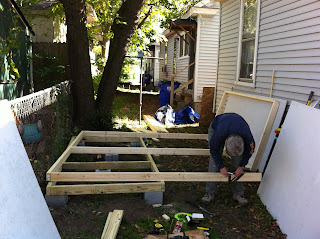 Before too long we had the floor and a couple of walls up.  We decided 8' was too high for the ceiling/roof so we made it only 6' 6". 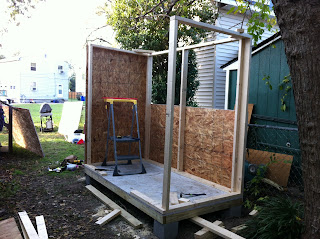 Then built another wall and stood it up. 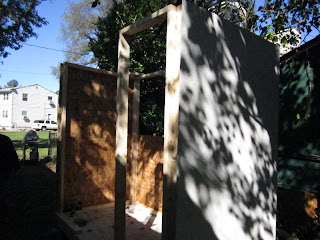 Then we cut the pieces for the doors and painted them. 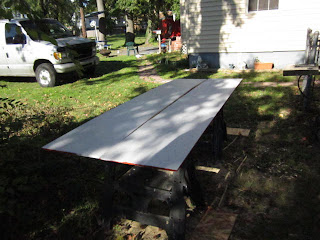 Then we put the front on and squared it up. 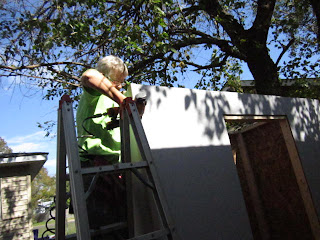 Pam also worked on the trim. 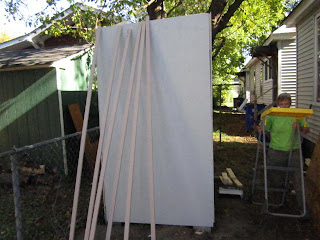 Another big effort was hanging rafters for the roof, putting the OSB down, wrapping it with a drip edge and putting the shingles down.

Just in case you are wondering that took us into day three.  At the close of day three, I was trimming the overhanging shingles.  But ran into a problem.

I sliced the top of my hand under the sharp drip edge as I was trimming them.  Yikes!  I cut a gash in my hand.  Good thing we were done for the day.

Off we went to Urgent Care (Patient First here in Virginia Beach) to sew up my hand.  An hour later I was all fixed up.

Here is a before and after shot: 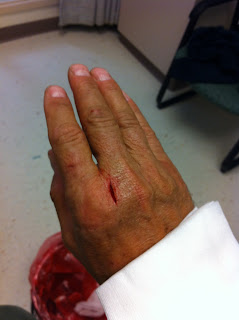 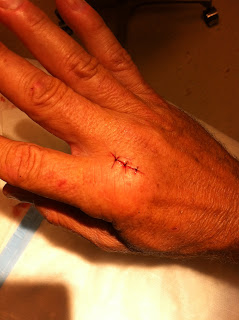 The doc did a terrific job and I had very little pain or issue with it.  The next day we finished up an hung the doors on the shed. 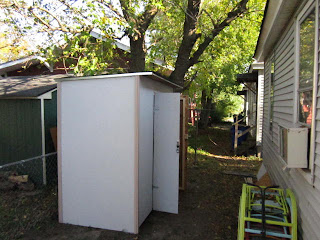 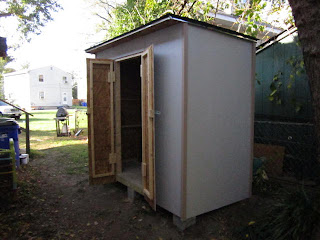 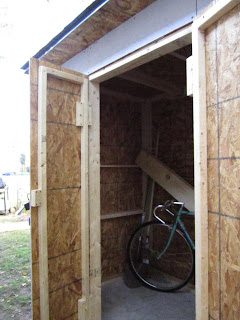 Kelly's bike and lawnmower plus some extra things will fit nicely into it.  We still have to make a few shelves, but we put a lock on it and will finish it up this week.  Mission accomplished.

One thing I was happy about it that it is solid and plumb.  I built a shed years ago in our stix and bricks house and had no concept of how to use a level.  So we are learning and almost complete with another project under our belt.