Here's an interactive map that shows where we traveled.  You can click on the letters and it will tell you the location.

During July, we put a lot of miles on the Roadrunner again.  Since we were in the Northwest, we wanted to see Seattle and Vancouver.  We did that by taking day trips.

We also took a long day trip to Anacortes Port for a ferry to Victoria BC which was great.

Then we went down the Oregon Coast and stayed at a Navy campground.  Turns out we should have only stayed there a few days so we could go farther south.  Instead we explored the area with time at Tillamook Cheese factory and some quaint towns along the coast.

We also stayed at an Oregon State Park that was a tight fit but adequate.

Our travels also took us along the northern states in the NW and we crossed the border a few times to say 'we have been in Alberta and Saskatchewan'.  We also stayed at Minot AFB Grand Forks AFB in North Dakota. 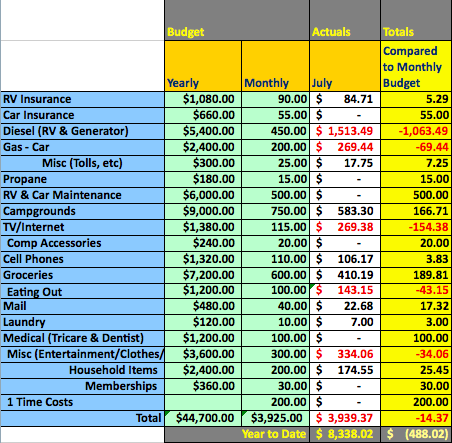 Biggest Expenses
Like the previous month of June, we spent a lot on fuel.  Both diesel and gas.
TV and Internet are budgeted wrongly as we are always over budget in this area.

Food (as in eating out) was little high for just the two of us, but then we were under in the grocery area so that was not a big deal.

Large One Time Cost Items
Nothing really stands out in this area this month. 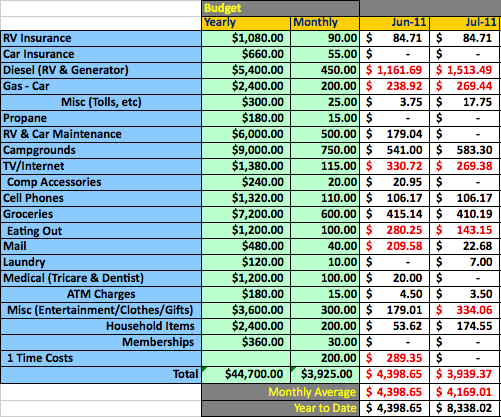 We were a modest $15 over budget this month and we were fine with that.

Thanks for taking a look with us on the budget and finances.  One reason I am doing this is to track our expenses and secondly - I hope it is helpful to some of you out there who might be asking "how much does it really cost to full-time as an RVer".

Posted by Roadrunner Chronicles at 7:58 AM