Written from the Roadrunner RV Park in Oklahoma City. 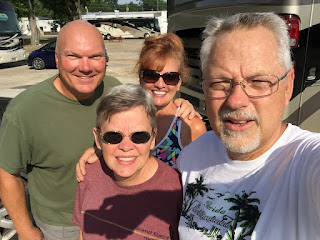 and spent two days in some great Arkansas campgrounds.  The first one was in West Memphis at Tom Sawyer's RV Park and last night we stayed at the Aux Arc COE (Corps of Engineers) Campground in Ozark, AR.  Both were very different but excellent stays.

We heard good things about the Tom Sawyer RV park on the banks of the Mississippi and the reviews on RVParkReviews looked pretty good.  It was a little higher than we liked ($40) but we decided to go for it.

We were not disappointed.  Amy at the front desk, was helpful and friendly and showed us to our site.  When we found that trees blocked any chance to get satellite TV access, she found a spot on the 5th wheel side of the campground that was completely open. 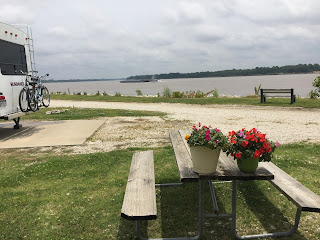 It threatened to rain but we got to see some tug boats and barges going up and down the Mighty Mississippi! 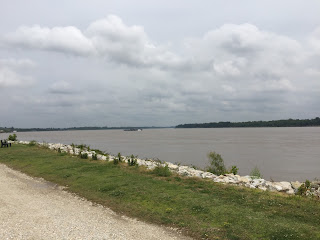 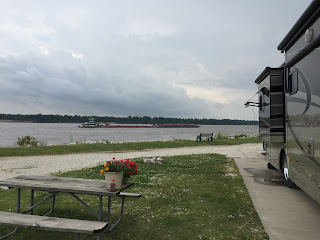 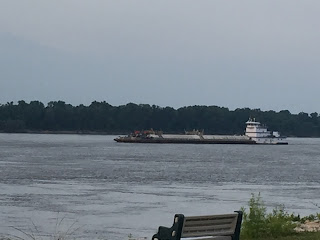 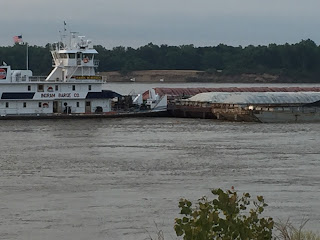 After threatening, it finally did rain.  We got caught having to wait for it to quit while our clothes were finishing up in the dryer.  We were about 500 yards away from the laundry room, so we waited out the downpour.  The amazing thing about the laundry was that it was FREE!  Don't know if we have stayed in a commercial campground with free washers and dryers! 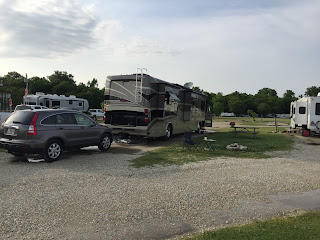 We enjoyed the afternoon and evening, had dinner at the coach and did not even unhook since we were there for only one night. 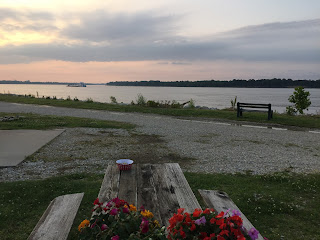 The next morning it was beautiful so I watched some more traffic on the river while I ate my breakfast. 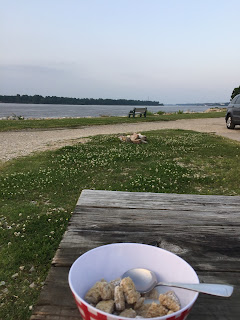 It was a nice way to start the morning.  Next we packed up and headed west toward Ozark AR and the Aux Arc COE Campground.

We commented more than once how strange the name "Aux Arc' was.  Later we learned it stemmed from the French settlers who called in by that name because of the area and the 'bend in the river'.  Aux Arc was later 'Americanized' to the name 'Ozark' which caught on for a whole part of the country.

When we arrived, we knew we wanted 50 amp service for the air conditioners and the TV, and we were able to choose from one of the three remaining campsites. But, they were on the wrong side of the road under the trees.  Turned out there was no satellite TV but we picked up a few local channels. For one night we survived fine. 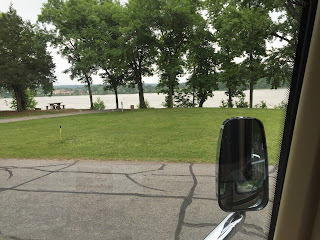 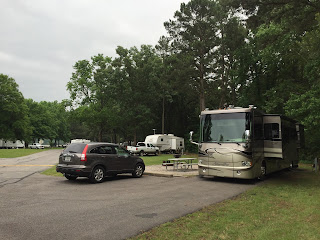 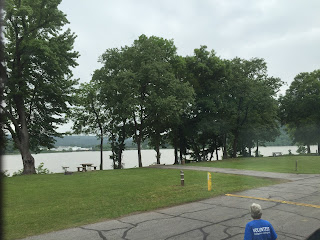 The view was great and the campground is right on the banks of the Arkansas River.   Beautiful and well manicured campground.  We were impressed!  It was nice to see a lot of families coming in for the weekend and enjoying the place. 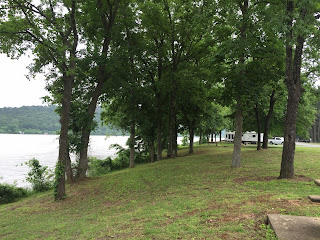 We didn't see any laundry service but the Army Corps of Engineers honors the National Park Service Senior Pass so our campsite for the night was $10!  That was really nice!

We did a bit of sightseeing in the area and drove 10 miles over to Altus AR which is the "Wine Capital of Arkansas'.  We even drove up to the Wiederkehr's Winery and property.  In the 1880's a group settled from Europe and established a community that became famous for its wine.

We haven't been this way before so it was an interesting couple of days and we were glad to see the Mississippi River up close. And we really like the COE park which makes us think we should look for more of them on our travels this summer.

Thanks for joining us today on the Roadrunner Chronicles!  And thanks for those comments -- we always appreciate them!


Posted by Roadrunner Chronicles at 6:15 AM